In search of the truth about volatile Verity 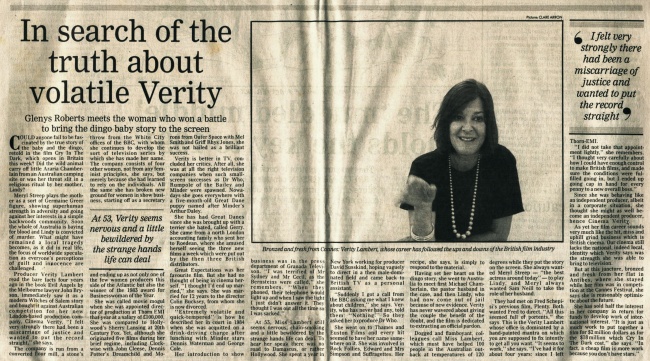 COULD anyone fail to be fascinated by the true story of the baby and the dingo, retold in the film Cry In The Dark, which opens in Britain this week? Did the wild animal carry off little Azaria Chamberlain from an Australian camping site or was her throat slit in a religious ritual by her mother, Lindy?

Meryl Streep plays the mother as a sort of Germaine Greer figure, showing superhuman strength in adversity and going against her interests in a simple backwoods community. Soon the whole of Australia is baying for blood and Lindy is convicted of murder. What might have remained a local tragedy becomes, as it did in real life, the focus of worldwide speculation as everyone's perceptions of guilt and innocence are challenged.

Producer Verity Lambert read the bare facts four years ago in the book Evil Angels by the Melbourne lawyer John Bryson, immediately saw it as a modern Witches of Salem story and bought it against Australian competition for her new London-based production company, Cinema Verity. "I felt very strongly there had been a miscarriage of justice and wanted to put the record straight," she says.

The company is run from a converted flour mill, a stone's throw from the White City offices of the BBC, with whom she continues to develop the sort of television series by which she has made her name. The company consists of four other women, not from any feminist principles, she says, but merely because she had learned to rely on the individuals. All the same she has broken new ground for women in show business, starting off as a secretary and ending up as not only one of the few women producers this side of the Atlantic but also the winner of the 1983 award for Businesswoman of the Year.

She was called movie mogul when she was appointed director of production at Thorn EMI that year at a salary of £100,000. She was compared to Hollywood's Sherry Lansing at 20th Century Fox. Yet, although she originated five films during her brief regime, including Clockwise with John Cleese, Dennis Potter's Dreamchild and Morons from Outer Space with Mel Smith and Griff Rhys Jones, she was not hailed as a brilliant success.

Verity is better in TV, concluded her critics. After all, she was at all the right television companies when such small-screen successes as Dr Who, Rumpole of the Bailey and Minder were spawned. Nowadays she goes everywhere with a five-month-old Great Dane puppy named after Minder's Arthur Daley.

She has had Great Danes since she was brought up with a terrier she hated, called Gerry. She came from a north London accounting family who sent her to Roedean, where she amused herself seeing the three new films a week which were put out by the then three British distributors.

Great Expectations was her favourite film. But she had no thought of being in cinema herself. "I thought I'd end up married," she says. She was married for 12 years to the director Colin Bucksey, from whom she is now divorced.

"Extremely volatile and quick-tempered" is how he described her in court in 1984 when she was acquitted on a drink-driving charge after lunching with Minder stars Dennis Waterman and George Cole.

Her introduction to show business was in the press department of Granada Televison. "I was terrified of Mr Sydney and Mr Cecil, as the Bernsteins were called," she remembers. "When they phoned, their telephone would light up and when I saw the light I just didn't answer it. They thought I was out all the time so I was sacked."

At 53, Miss Lambert still seems nervous, chain-smoking and a little bewildered by the strange hands life can deal. To hear her speak there was no road to Damascus, or rather Hollywood. She spent a year in New York working for producer David Susskind, hoping vaguely to direct in a then male-dominated field and came back to British TV as a personal assistant.

"Suddenly I got a call from the BBC asking me what I knew about children," she says. Verity, who has never had any, told them: "Nothing." So they asked her to produce Dr Who.

She went on to Thames and Euston Films and every hit seemed to have her name some, where on it. She was involved in Rock Follies, Edward and Mrs Simpson and Suffragettes. Her recipe, she says, is simply to respond to the material.

Having set her heart on the dingo story, she went to Australia to meet first Michael Chamberlain, the pastor husband in the case, and then Lindy, who had now come out of jail because of new evidence. Verity has never wavered about giving the couple the benefit of the doubt, and the film is dedicated to extracting an official pardon.

Dogged and flamboyant, colleagues call Miss Lambert, which must have helped 100 people in the Australian outback at temperatures of 120 degrees while they put the story on the screen. She always wanted Meryl Streep — "the best actress around today" — to play Lindy, and Meryl always wanted Sam Neill to take the role of her husband.

They had met on Fred Schepisi's previous film, Plenty. Both wanted Fred to direct. "All this seemed full of portents," She says. This is the Verity Lambert whose office is dominated by a hand-painted mantra on which you are supposed to fix intently to get all you want. "It seems to work," she says. "I've had it for about four years: since I left Thorn-EMI.

"I did not take that appointment lightly," she remembers. "I thought very carefully about how I could have enough control to make British films, and made sure the conditions were fulfilled going in, but I ended up going cap in hand for every penny to a new overall boss."

As yet her film career sounds very much like the hit, miss and uphill grind business which is British cinema. Our cinema still lacks the national, indeed local, identity which Verity says was the strength she was able to bring to television.

But at this juncture, bronzed and fresh from her flat in Antibes, where she stayed while her film was in competition at the Cannes Festival, she says she is reasonably optimistic about the future.

She has sold half the interest in her company in return for funds to develop work of international interest. "It is just as much work to put together a film for $2 million dollars as for the $18 million which Cry In The Dark cost," she says. "In fact, a cheap film is more work because you don't have stars."

Caption: Bronzed and fresh from Cannes: Verity Lambert, whose career has followed the ups and downs of the British film industry