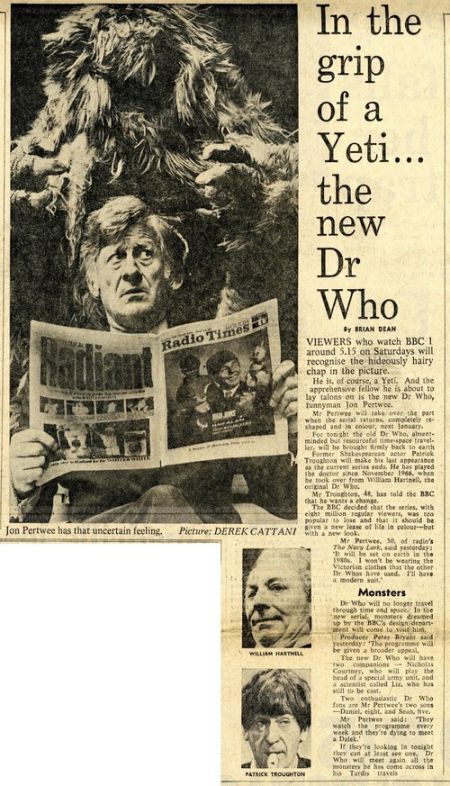 Viewers who watch BBC1 around 5.15 on Saturdays will recognise that chap in the picture.

He is, of course, a Yeti. And the apprehensive fellow is about to lay talons on is the new Dr Who, funny man Jon Pertwee.

Mr Pertwee will take over the part when the serial returns, completely reshaped an in color, next January.

For tonight the old Dr Who, absent-minded but resourceful time-space traveller, will be bought firmly back to earth.

Former Shakespearean actor Patrick Troughton will make his last per appearance as the current series ends. He has played the doctor since November 1966, when he took over from William Hartnell, the original Dr Who.

Mr. Troughton, 48, has told the BBC that he wants a change.

The BBC decided that the series, with eight million regular viewers, was too popular to lose and that it should be given a new lease on life in colour - but with a new look.

Mr. Pertwee, 50, of radio's The Navy Lark, said yesterday: 'It will be sat on earth in the 1980s. I won't be wearing the Victorian clothes that the other Dr Whos have used. I'll have a modern suit.'

Dr Who will no longer travel through time and space. In the new serial, monsters dreamed up by the BBC's design department will come to visit him.

Producer Peter Bryant said yesterday: 'The programme will be given a broader appeal.

The new Dr Who will have two companions - Nicholas Courtney, who will play the head of a special army unit, and a scientist called Liz, who has still to be cast.'

Mr. Pertwee said: 'They watch the programme every week and their dying to meet a Dalek.'

If they're looking into night they can at least see one. Dr Who will meet again all the monsters has come across in his Tardis travels

Caption: Jon Pertwee has that on certain feeling.