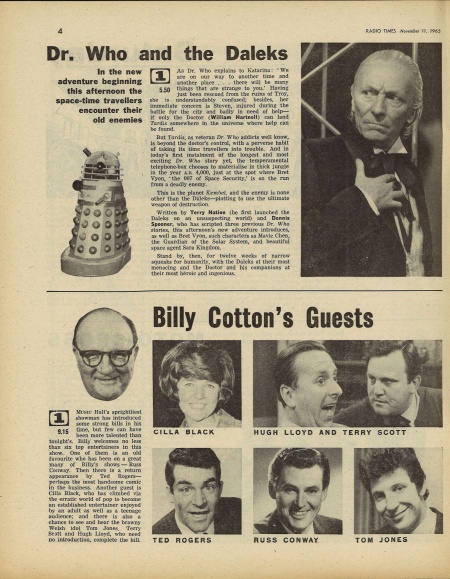 Dr. Who and the Daleks

As Dr. Who explains to Katarina : ' We are on our way to another time and another place ... there will be many 5.50 things that are strange to you.' Having just been rescued from the ruins of Troy, she is understandably confused; besides, her immediate concern is Steven, injured during the battle for the city and badly in need of help—if only the Doctor (William Hartnell) can land Tardis somewhere in the universe where help can be found.

But Tardis, as veteran Dr. Who addicts well know, is beyond the doctor's control, with a perverse habit of taking its time travellers into trouble. And in today's first instalment of the longest and most exciting Dr. Who story yet, the temperamental telephone-box chooses to materialise in thick jungle in the year A.D. 4,000, just at the spot where Bret Vyon, 'the 007 of Space Security,' is on the run from a deadly enemy.

This is the planet Kembel, and the enemy is none other than the Daleks—plotting to use the ultimate weapon of destruction.

'Written by Terry Nation (he first launched the Daleks on an unsuspecting world) and Dennis Spooner, who has scripted three previous Dr. Who stories, this afternoon's new adventure introduces, as well as Bret Vyon, such characters as Mavic Chen, the Guardian of the Solar System, and beautiful space agent Sara Kingdom.

Stand by, then, for twelve weeks of narrow squeaks for humanity, with the Daleks at their most menacing and the Doctor and his companions at their most heroic and ingenious.