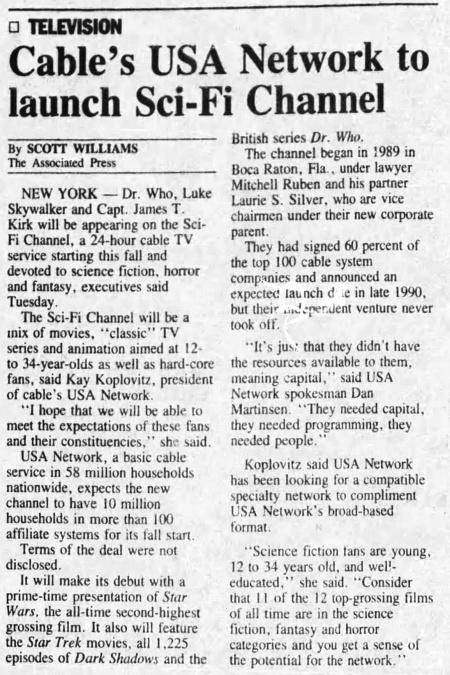 Dr. Who, Luke Skywalker and Capt. James T. Kirk will be appearing on the Sci-Fi Channel, a 24-hour cable TV service starting this fall and devoted to science fiction, horror and fantasy, executives said Tuesday.

The Sci-Fi Channel will be a mix of movies, "classic" TV series and animation aimed at 12- to 34-year-olds as well as hard-core fans, said Kay Koplovitz, president of cable's USA Network.

"I hope that we will be able to meet the expectations of these fans and their constituencies," she said.

It will make its debut with a prime-time presentation of "Star Wars," the all-time second-highest grossing film. It also will feature the "Star Trek" movies, all 1,225 episodes of "Dark Shadows" and the British series "Dr. Who."

The channel began in 1989 in Boca Raton, Fla., under lawyer Mitchell Ruben and his partner Laurie S. Silver, who are vice chairmen under their new corporate parent.

They had signed 60 percent of the top 100 cable system companies and announced an expected launch date in late 1990, but their independent venture never took off.

"It's just that they didn't have the resources available to them, meaning capital," said USA Network spokesman Dan Martinsen. "They needed capital, they needed programming, they needed people."

"Science fiction fans are young, 12 to 34 years old, and well-educated," she said. "Consider that 11 of the 12 top-grossing films of all time are in the science fiction, fantasy and horror categories and you get a sense of the potential for the network."