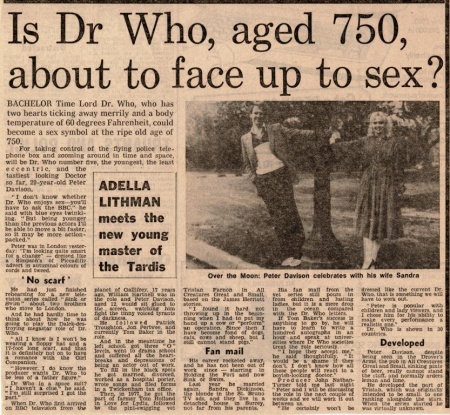 ADELLA LITHMAN meets the new young master of the Tardis

BACHELOR Time Lord Dr Who, who has two hearts ticking away merrily and a body-temperature of 60 degrees Fahrenheit, could become a sex symbol at the ripe old age, of 750....

For taking controls of the flying police telephone box and zooming around in time and space, will be Dr Who Number Five, the Youngest, the least eccentric and tastiest looking doctor so far, 29-year-old Peter Davison.

"I don't know whether Dr Who enjoys sex--you'll have to ask the BBC," he said with blue eyes twinkling. "But being younger than the previous actors I'll be able to move a bit faster, so it may be more action-packed."

Peter Davison was in London yesterday-- I'm looking quite smart for a change"-- dressed like a Simpsons of Piccadilly advert in cords and tweed.

He had just finished rehearsing for a new television series called "Sink or Swim," about two brothers who move to London.

Arid he had hardly time to think about how he was going to play the Dalek-destroying megastar role, which will be seen in 30 countries.

"All I know is I won't be wearing a floppy hat and a 17-foot long scarf, and that it is definitely not on to have a romance with the Girl companion," he said.

"However, I do know the producer wants Dr Who to be less of a father figure."

Producer John Nathan-Turner told me last night : "Peter and I will be discussing the role in the next couple of weeks and we will work it out between us.

"He certainly won't be dressed up like the current Dr Who. That is something we will have to work out.

"He will, however, have the two companions, Adric, the boy played by Matthew Waterhouse, and Janet Fielding, who will play a 21-year-old Australian air stewardess.

He added: "Peter is popular with children and lady viewers and I chose him for his ability to make every performance a realistic one."

When Dr Who first arrived on BBC television from the planet Gallifrey 17 years ago, William Hartnell was in the role and Peter Davison, then aged 12, would sit glued to the screen, watching him fight those tinny voiced tyrants of darkness.

He followed Patrick Troughton, Jon Pertwee and currently Tom Baker in the role.

And in the meantime he left school with three "O" Levels, went to drama school, and suffered all the heartbreaks and depressions of being an actor out of work.

To fill in the blackspots he got married, divorced, worked as a hospital porter, wrote-songs and flied forms in a Twickenham tax office.

Then in 1977 he got the part of fernier Tom Holland in "Love for Lydia," followed by the vet Tristan Farnon in "All Creatures Great and Small," based on the James Heriot stories.

"I, found it hard not throwing up in the beginning when I had to put my hand up a cow or perform an operation," he said.

Since then I have become fond of dogs, cats, cows and sheep but I still cannot stand pigs."

Despite being seen regularly sinking pints of beer in the Drover's Arms, the pub in "All Creatures Great and Small," Peter really cannot stand the stuff and normally drinks lemon and lime.

During the series, be developed the part of Tristan from a modest role to one ranking alongside the stars.

As a result, his career rocketed away and he has not been out of work since starring in "Holding The Fort" and now "Sink or Swim."

Last year he married again, Sandra Dickinson, the blonde in the St Bruno TV ads and they live in a detached house in Woking, Surrey, not far from his parents.

His fanmail from the vet series still pours in from children and lusting ladies, but it is a mere drop in the ocean compared, with the "Dr Who" letters.

If Tom Baker's success is anything to go by, he will have to learn to write a hundred autographs in an hour and speak at universities where Dr Who" societies treat the role seriously.

"I hope they accent me," he said thoughtfully. "It would be a shame if they don't. I don't know how all these people will react to a boyish-looking doctor."

Caption: Over the moon: Peter Davison celebrates with his wife Sandra