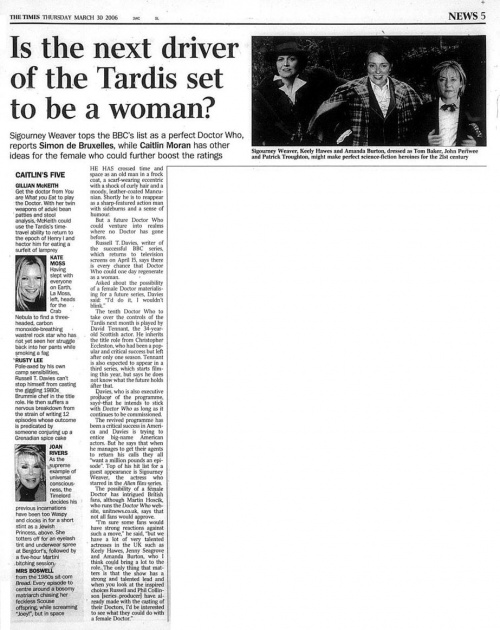 Sigourney Weaver tops the BBC's list as a perfect Doctor Who, reports Simon de Bruxelles, while Caitlin Moran has other ideas for the female who could further boost the ratings

HE HAS crossed time and space as an old man in a frock coat, a scarf-wearing eccentric with a shock of curly hair and a moody, leather-coated Mancunian. Shortly he is to reappear as a sharp-featured action man with sideburns and a sense of humour.

But a future Doctor Who could venture into realms where no Doctor has gone before.

Russell T. Davies, writer of the successful BBC series, which returns to television screens on Aped 15, says there is every chance that Doctor Who could one day regenerate as a woman.

Asked about the possibility of a female Doctor materialising for a future series. Davies said "I'd do it. I wouldn't blink."

The tenth Doctor Who to take over the controls of the Tardis next month is played by David Tennant. the 34-yearold Scottish actor. He inherits the title role from Christopher Eccleston. who had been a popular and critical success hut left after only one season. Tennant is also expected to appear in a third series, which starts filming this year. but says he does not know what the future holds after that.

Davies, who is also executive producer of the programme, says that he intends to stick with Doctor Who as long as it continues to be commissioned The revived programme has been a critical success in America and Davies is trying to entice big-name American actors. But he says that when he manages to get their agents to return his calls they all "want a million pounds an episode". Top of his hit list for a guest appearance is Sigourney Weaver, the actress who starred in the Alien film series.

The possibility of a female Doctor has intrigued British fans, although Martin Hoscik. who runs the Doctor Who web-site unitnews.co.uk. says that not all fans would approve "I'm sure some fans would have strong reactions against such a move," he said, "but we have a lot of very talented actresses in the UK such as Keely Hawes, Jenny Seagrove and Amanda Burton, who I think could bring a lot to the role. The only thing that matters is that the show has a strong and talented lead and when you look at the inspired choices Russell and Phil Collinson [series producer) have already made with the casting of their Doctors, I'd be interested to see what they could do with a female Doctor."

Get the doctor from You are What you Eat to play the Doctor. With her twin weapons of aduki bean patties and stool analysis. McKeith could use the Tardis's time travel ability to return to the epoch of Henry I and hector him for eating a surfeit of lamprey

Having slept with everyone on Earth, La Moss, left, heads for the Crab Nebula to find a three-headed, carbon monoxide-breathing wastrel rock star who has not yet seen her struggle back into her pants while smoking a fag

Pole-axed by his oven camp sensibilities. Russell T. Davies can't stop himself from casting the giggling 1980s Brummie chef in the title role. He then suffers a nervous breakdown from the strain of writing 12 episodes whose outcome is predicated by someone conjuring up a Grenadian spice cake

As the supreme example of universal consciousness. the Timelord decides his previous incarnations have been too Waspy and clocks in for a short stint as a Jewish Princess, above. She totters off for an eyelash tins and underwear spree at Bergdorf's followed by a five-hour Martini

from the 1980s sit-corn Bread. Every episode to centre around a bosomy matriarch chasing her redden Scouse offspring. while screaming "Joey", but in space