Is there a Doctor in the house? (New Statesman) 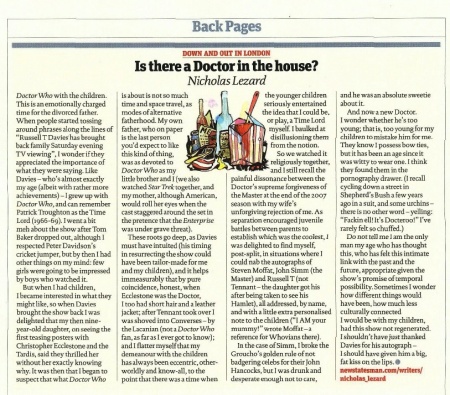 Doctor Who with the children. This is an emotionally charged time for the divorced father. When people started tossing around phrases along the lines of "Russell T Davies has brought back family Saturday evening TV viewing", I wonder if they appreciated the importance of what they were saying. Like Davies--who's almost exactly my age (albeit with rather more achievements)--I grew up with Doctor Who, and can remember Patrick Troughton as the Time Lord (1966-69). I went a bit meh about the show after Tom Baker dropped out, although I respected Peter Davidson's cricket jumper, but by then I had other things on my mind: few girls were going to be impressed by boys who watched it.

But when I had children, I became interested in what they might like, so when Davies brought the show back I was delighted that my then nine-year-old daughter, on seeing the first teasing posters with Christopher Ecclestone and the Tardis, said they thrilled her without her exactly knowing why. It was then that I began to suspect that what Doctor Who is about is not so much time and space travel, as modes of alternative fatherhood. My own father, who on paper is the last person you'd expect to like this kind of thing, was as devoted to Doctor Who as my little brother and I (we also watched Star Trek together, and my mother, although American, would roll her eyes when the cast staggered around the set in the pretence that the Enterprise was under grave threat).

These roots go deep, as Davies must have intuited (his timing in resurrecting the show could have been tailor-made for me and my children), and it helps immeasurably that by pure coincidence, honest, when Ecclestone was the Doctor, I too had short hair and a leather jacket; after Tennant took over I was shoved into Converses--by the Lacanian (not a Doctor Who fan, as far as I ever got to know); and I flatter myself that my demeanour with the children has always been eccentric, other-worldly and know-all, to the point that there was a time when the younger children seriously entertained the idea that I could be, or play, a Time Lord myself. I baulked at disillusioning them from the notion.

So we watched it religiously together, and I still recall the painful dissonance between the Doctor's supreme forgiveness of the Master at the end of the 2007 season with my wife's unforgiving rejection of me. As separation encouraged juvenile battles between parents to establish which was the coolest, I was delighted to find myself, post-split, in situations where I could nab the autographs of Steven Moffat, John Simm (the Master) and Russell T (not Tennant--the daughter got his after being taken to see his Hamlet), all addressed, by name, and with a little extra personalised note to the children ("I AM your mummy!" wrote Moffat--a reference for Whovians there).

In the case of Simm, I broke the Groucho's golden rule of not badgering celebs for their John Hancocks, but I was drunk and desperate enough not to care, and he was an absolute sweetie about it.

And now a new Doctor. I wonder whether he's too young; that is, too young for my children to mistake him for me. They know I possess bow ties, but it has been an age since it was witty to wear one. I think they found them in the pornography drawer. (I recall cycling down a street in Shepherd's Bush a few years ago in a suit, and some urchins--there is no other word--yelling: "Fackin ell! It's Docteroo!" I've rarely felt so chuffed.)

Do not tell me I am the only man my age who has thought this, who has felt this intimate link with the past and the future, appropriate given the show's promise of temporal possibility. Sometimes I wonder how different things would have been, how much less culturally connected I would be with my children, had this show not regenerated. I shouldn't have just thanked Davies for his autograph--I should have given him a big, fat kiss on the lips.