Is there time for a mid-life crisis? 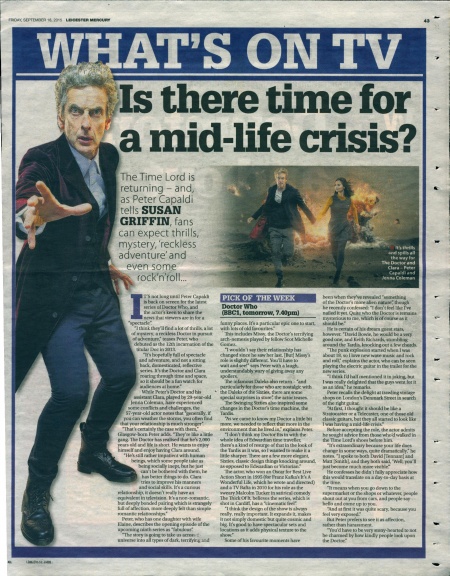 The Time Lord is returning — and, as Peter Capaldi tells SUSAN GRIFFIN, fans can expect thrills, mystery, 'reckless adventure' and even some rock'n'roll...

IT'S not long until Peter Capaldi is back on screen for the latest series of Doctor Who, and the actor's keen to share the news that viewers are in for a "spectacle":

"I think they'll find a lot of thrills, a lot of mystery, a reckless Doctor in pursuit of adventure," teases Peter, who debuted as the 12th incarnation of the titular Doc in 2013.

"It's hopefully full of spectacle and adventure, and not a sitting back, domesticated, reflective series. It's the Doctor and Clara roaring through time and space, so it should be a fun watch for audiences at home!"

While Peter's Doctor and his assistant Clara, played by 29-year-old " Jenna Coleman, have experienced some conflicts and challenges, the 57-year-old actor notes that "generally, if

you can weather the storms, you often find that your relationship is much stronger':

"That's certainly the case with them," Glasgow-born Peter adds. "They're like a little gang. The Doctor has realised that he's 2,000 years old and life is short. He wants to enjoy himself and enjoy having Clara around.

"He's still rather impatient with human beings, which some people take as being socially inept, but he just can't be bothered with them, he has better things to do. Clara tries to improve his manners and social skills. It's a curious relationship, it doesn't really have an equivalent in television. It's a non-romantic, but deeply bonded pairing which is strangely full of affection, more deeply felt than simple romantic relationships!'

Peter, who has one daughter with wife Elaine, describes the opening episode of the upcoming ninth series as "fabulous':

"The story is going to take us across t universe into all types of dark, terrifying and funny places. It's a particular epic one to start, with lots of old favourites!'

"I wouldn't say their relationship has changed since he saw her last. [But] Missy's role is slightly different. You'll have to wait and see!" says Peter with a laugh, understandably wary of giving away any spoilers.

The infamous Daleks also return - "and particularly for those who are nostalgic with the Daleks of the Sixties, there are some special surprises in store',' the actor teases.

The Swinging Sixties also inspired some changes in the Doctor's time machine, the Tardis.

"As we came to know my Doctor a little bit more, we needed to reflect that more in the environment that he lived in," explains Peter.

"I don't think my Doctor fits in with the whole idea of Edwardian time traveller, there's a kind of resurge of that in the look of the Tardis as it was, so I wanted to make it a little sharper. There are a few more elegant, Sixties, classic design things knocking around, as opposed to Edwardian or Victorian."

The actor, who won an Oscar for Best Live Action Short in 1995 (for Franz Kafka's It's A Wonderful Life, which he wrote and directed) and a TV Bafta in 2010 for his role as the sweary Malcolm Tucker in satirical comedy The Thick Of It, believes the series, which is shot in Cardiff, has a "cinematic feel':

"I think the design of the show is always really, really important. It expands it, makes it not simply domestic but quite cosmic and big. It's good to have spectacular sets and locations as it adds physical texture to the show!'

Some of his favourite moments have been when they've revealed "something of the Doctor's more alien nature", though he recently confessed: "I don't feel like I've nailed it yet. Quite who the Doctor is remains mysterious to me, which is of course as it should be!'

He is certain of his dream guest stars, however. "David Bowie, he would be a very good one, and Keith Richards, stumbling around the Tardis, knocking out a few chords.

"The punk explosion started when I was about 18, so I love new wave music and rock and roll;' explains the actor, who can be seen playing the electric guitar in the trailer for the new series.

"I think I'd half mentioned it in joking, but I was really delighted that the guys went for it as an idea," he remarks.

Peter recalls the delight at trawling vintage shops on London's Denmark Street in search of the right guitar.

"At first, I thought it should be like a Stratocaster or a Telecaster, one of those old classic guitars, but they all started to look like I was having a mid-life crisis:'

Before accepting the role, the actor admits he sought advice from those who'd walked in the Time Lord's shoes before him.

"It's extraordinary because your life does change in some ways, quite dramatically," he notes. "I spoke to both David [Tennant] and Matt [Smith], and they both said, 'Well, you'll just become much more visible!'

He confesses he didn't fully appreciate how this would translate on a day-to-day basis at the time.

"It means when you go down to the supermarket or the shops or whatever, people shout out at you from cars, and people say hello and come up to you.

"And at first it was quite scary, because you feel very exposed!'

But Peter prefers to see it as affection, rather than harassment.

"You'd have to be very stony-hearted to not be charmed by how kindly people look upon the Doctor!'

Caption: It's thrills and spills all the way for The Doctor and Clara - Peter Capaldi and Jenna Coleman