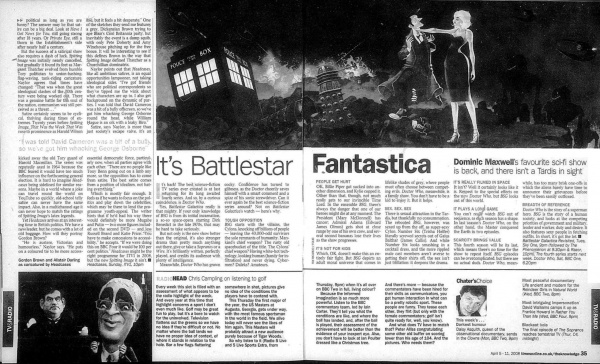 Dominic Maxwell's favourite sci-fi show is back, and there isn't a Tardis in sight

It's back The best science-fiction TV series ever created is at last returning for its long awaited fourth series. And so, by a curious coincidence, is Doctor Who.

Yes, Battlestar Galactica really is that mighty. If your only knowledge of BSG is from its initial intimation. a so-so space-opera starring Dirk Benedict in the late 1970s, that may be hard to take seriously.

But not only is the new show better than the original, it's also stronger drama than pretty much anything out there, give or take a Sopranos or a Hire. It's brilliantly written. perfectly played, and credits its audience with plenty of intelligence.

Meanwhile, Doctor Who has grown cocky. Confidence has turned to glibness, as the Doctor cheerily saves himself with a smart comment and a via of his sonic screwdriver. Can it ever again be the best science-fiction series around? Not on Battlestar Galactica's watch — here's why.

650 starts with the villains, the Cylons, knocking off billions of people — leasing the 40,000-odd survivors the sole remnants of humanity. Mankind's chief weapon? The rusty old spacebucket of the tide The C}Toni chief weapon? Having white-hot technology, looking human (handy for infiltration) and never dying. Cybermen? Daleks? Amateurs.

OK. Billie Piper got sucked into another dimension, and Kylie copped it Other than that. though, not much really gets to our invincible Time Lord. In the ensemble BSG. there's always the danger that one of our heroes might die at any moment. The President (Mary McDonnell) has cancer. Admiral Adama (Edward James Olmos) gets shot at close range by one of his mm cress, and several second bananas lose their lives as the show progresses.

ITS NOT FOR KIDS

Which, OK, doesn't make this an entirely fair fight. But BSG depicts an adult moral universe that comes in lifelike shades of grey, where people must often choose between competing evils. Doctor Who, meanwhile. is a family show. You don't have to be a kid to enjoy it But it helps.

There is sexual attraction in the Tardis, but thankfully no consummation. The rebooted BSG. however, was sexed up from the of as super-sexy Cylon. Number Six (Trisha Helfer) literally screwed secrets out of Gaits Balthar (James Calls). And while Number Si looks smashing in a cocktail dress. and the more rippled male cast members aren't averse to getting their shirts off. the sex isn't just titillation: it deepens the drama.

ITS REALLY FILMED IN SPACE

It isn't? Well it certainly looks like it is. Respect to the special effects on the new Donor Who, but BSG looks out of this world.

IT PLAYS A LONG GAME

You can't really watch BSG out of sequence, as each season has a shape. In last season's Doctor Who, on the other hand the Master conquered the Earth in two episodes.

This fourth season will be its last which means there's no time for the show to repeat itself. BSG episodes an be overcomplicated. but there are no actual duds. Doctor Who, meanwhile. has too many brisk one-offs in which the aliens barely have time to announce their grievances before they've been sassily outfoxed.

Doctor Who is the story of a superman hero. BSG is the story of a human society. and looks at the competing priorities of government and military. leader and worker. duty and desire It also features sexy people in fetching outfits. In short, it's got the lot.