It's Sarah Jane - star of scream 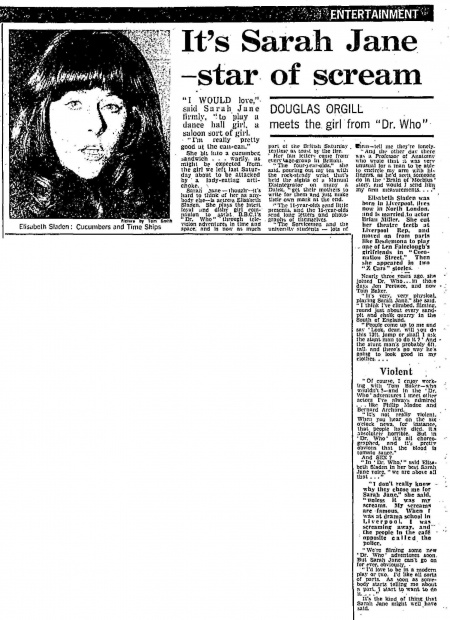 "I WOULD love," said Sarah Jane 't to play a dance hall girl, a saloon sort of girl. "I'm really pretty good at the can-can."

She bit into a cucumber sandwich ... warily, as might be expected from the girl we left last Saturday about to be attacked by a lady-eating artichoke. "Sarah Jane — though--it's hard to think of her as anybody else—is secrets Elisabeth Sladen, She plays the Pam loyal and dishy girl companion to assist B.B.C.1's "Dr. Who" through television adventures in time and space, and is now as much part of the British Saturday teatime as toast by the fire.

Her fan letters come from ever age-group in Britain.

"The four-year-olds," she acid, pouring out my tea with the rock-steady wrist that's held the sights of a Manual Disintegrator on many a Dalek, "get their mothers to write for them and just make their own mark at the end.

"The Servicemen and the university students — lots of them—tell me they're lonely.

"And the other day there was a Professor of Anatomy who wrote that it was very unusual for a man to be able to encircle my arm with fingers, as he'd seen someone do in the 'Brain of Morbius' story, and would I send him my firm measurements..."

Elisabeth Sladen was born in Liverpool, lives now in North London, and is married to actor Brian Miller. She cut her theatre teeth at Liverpool Rep, and moved on from parts like Desdemona to play one of Len Falrclough's girlfriends in "Coronation Street." Then she appeared in two Z Cars" stories.

Nearly three years ago, she Joined Dr. Who... in those days Jon Pertwee, and now Tom Baker.

"It's very, very physical, playing Sarah Jane," she said, I think I've climbed, filming, round just about every sand. pit and chalk quarry in the South of England.

"People come up to me and say 'Look, dear will you do this 13ft. jump or shall I ask the stunt man to do it And the stunt man's probably 6ft tall and there's no way he's going to look good in my clothes...

"Of course, I enjoy working with Tom Baker—who wouldn't —and in the 'Dr, Who' adventures I meet other actors I've always admired like Philip Madoc and Bernard Archard.

"It's not really violent. When you hear on the six o'clock news, for instance, that people have died, it's absolutely horrible. But in 'Dr. Who' it's all choreographed, and it's pretty obvious that the blood is tomato sauce."

"In Dr, Who," said Elisabeth Sladen in her best Sarah Jane voice. "we are above all that..."

"I don't really know why they chose me for Sarah Jane," she said, "unless it was my screams. My screams are famous. When was at drama school in Liverpool. I was screaming away, and the people in the café opposite called the police.

"We're filming some new 'Dr. Who' adventures soon. But Sarah Jane can't go on for ever, obviously.

"I'd love to be in a modern play or two. I'd like all sorts of parts. As soon as somebody starts telling me about a part. I start to want to do it ..."

It's the kind of thing that Sarah Jane might well have said.