It's not easy being a Time Lord 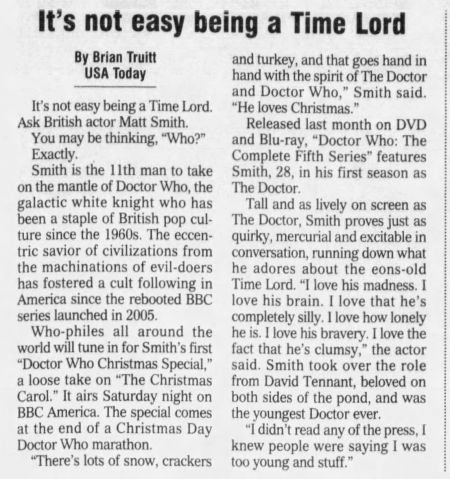 It's not easy being a Time Lord. Ask British actor Matt Smith.

You may be thinking, "Who?" Exactly.

Smith is the 11th man to take on the mantle of Doctor Who, the galactic white knight who has been a staple of British pop culture since the 1960s. The eccentric savior of civilizations from the machinations of evil-doers has fostered a cult following in America since the rebooted BBC series launched in 2005.

Who-philes all around the world will tune in for Smith's first "Doctor Who Christmas Special," a loose take on "The Christmas Carol." It airs Saturday night on BBC America. The special comes at the end of a Christmas Day Doctor Who marathon.

"There's lots of snow, crackers and turkey, and that goes hand in hand with the spirit of The Doctor and Doctor Who," Smith said. "He loves Christmas."

Released last month on DVD and Blu-ray, "Doctor Who: The Complete Fifth Series" features Smith, 28, in his first season as The Doctor.

Tall and as lively on screen as The Doctor, Smith proves just as quirky, mercurial and excitable in conversation, running down what he adores about the eons-old Time Lord. "I love his madness. I love his brain. I love that he's completely silly. I love how lonely he is. I love his bravery. I love the fact that he's clumsy," the actor said. Smith took over the role from David Tennant, beloved on both sides of the pond, and was the youngest Doctor ever.

"I didn't read any of the press, I knew people were saying I was too young and stuff."