It's owl in good cause to raise lots of loot 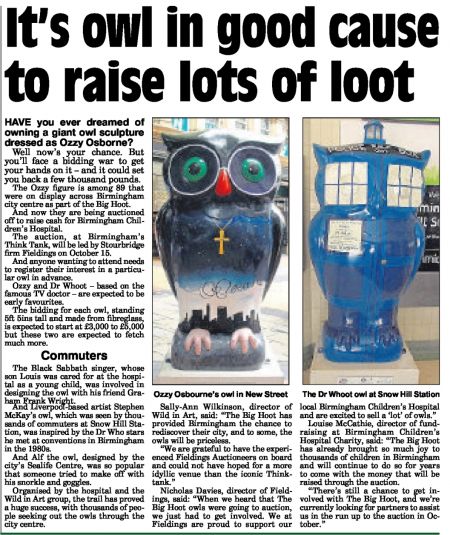 HAVE you ever dreamed of owning a giant owl sculpture dressed as Ozzy Osborne?

Well now's your chance. But you'll face a bidding war to get your hands on it - and it could set you back a few thousand pounds. The Ozzy figure is among 89 that were on display across Birmingham city centre as part of the Big Hoot. And now they are being auctioned off to raise cash for Birmingham Children's Hospital.

The auction, at Birmingham's Think Tank, will be led by Stourbridge firm Fieldings on October 15.

And anyone wanting to attend needs to register their interest in a particular owl in advance.

Ozzy and Dr Whoot - based on the famous TV doctor - are expected to be early favourites.

The bidding for each owl, standing 5ft Sins tall and made from fibreglass, is expected to start at £3,000 to £5,000 but these two are expected to fetch much more.

The Black Sabbath singer, whose son Louis was cared for at the hospital as a young child, was involved in designing the owl with his friend Graham Frank Wright.

And Liverpool-based artist Stephen McKay's owl, which was seen by thousands of commuters at Snow Hill Station, was inspired by the Dr Who stars he met at conventions in Birmingham in the 1980s.

And Alf the owl, designed by the city's Sealife Centre, was so popular that someone tried to make off with his snorkle and goggles.

Organised by the hospital and the Wild in Art group, the trail has proved a huge success, with thousands of people seeking out the owls through the city centre.

Sally-Ann Wilkinson, director of Wild in Art, said: "The Big Hoot has provided Birmingham the chance to rediscover their city, and to some, the owls will be priceless.

"We are grateful to have the experienced Fieldings Auctioneers on board and could not have hoped for a more idyllic venue than the iconic Think-tank."

Nicholas Davies, director of Fieldings, said: "When we heard that The Big Hoot owls were going to auction, we just had to get involved. We at Fieldings are proud to support our local Birmingham Children's Hospital and are excited to sell a 'lot' of owls." Louise McCathie, director of fundraising at Birmingham Children's Hospital Charity, said: "The Big Hoot has already brought so much joy to thousands of children in Birmingham and will continue to do so for years to come with the money that will be raised through the auction.

"There's still a chance to get involved with The Big Hoot, and we're currently looking for partners to assist us in the run up to the auction in October."