It's quite fun to indulge the darker aspects of your psyche 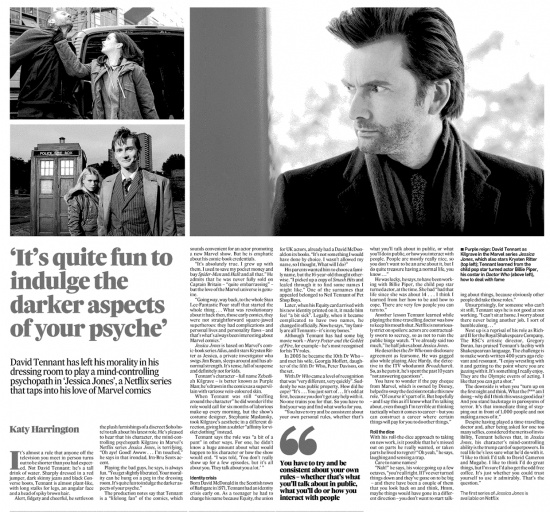 David Tennant has left his morality in his dressing room to play a mind-controlling psychopath in 'Jessica Jones', a Netflix series that taps into his love of Marvel comics

It's almost a rule that anyone off the television you meet in person turns out to be shorter than you had expected. Not David Tennant: he's a tall drink of water. Sharply dressed in a red jumper, dark skinny jeans and black Converse boots, Tennant is almost plant-like, with long stalks for legs, an angular face and a head of spiky brown hair.

Alert, fidgety and cheerful, he settles on the plush furnishings of a discreet Soho hotel to talk about his latest role. He's pleased to hear that his character, the mind-controlling psychopath Kilgrave in Marvel's Netflix series Jessica Jones, is terrifying. "Oh aye! Good! Awww ... I'm touched," he says in that ironclad, Irn-Bru Scots accent.

Playing the bad guys, he says, is always fun. "You get slightly liberated. Your morality can be hung on a peg in the dressing room. It's quite fun to indulge the darker aspects of your psyche."

The production notes say that Tennant is a "lifelong fan" of the comics, which sounds convenient for an actor promoting a new Marvel show. But he is emphatic about his comic-book credentials.

"It's absolutely true. I grew up with them. I used to save my pocket money and buy Spider-Man and Hulk and all that." He admits that he was never fully sold on Captain Britain - "quite embarrassing" but the love of the Marvel universe is genuine.

"Going way, way back, to the whole Stan Lee-Fantastic Four stuff that started the whole thing ... What was revolutionary about it back then, those early comics, they were not straightforward square-jawed superheroes: they had complications and personal lives and personality flaws - and that's what's always been interesting about Marvel comics."

Jessica Jones is based on Marvel's comic-book series Alias, and it stars Krysten Ritter as Jessica, a private investigator who swigs Jim Beam, sleeps around and has abnormal strength. It's tense, full of suspense and definitely not for kids.

When Tennant was still "sniffing around the character" he did wonder if the role would call for six months of laborious make-up every morning, but the show's costume designer, Stephanie Maslansky, took Kilgrave's aesthetic in a different direction, giving him a subtler "affinity for violet clothing" instead.

Tennant says the role was "a bit of a punt" in other ways. For one, he didn't know a huge amount about what would happen to his character or how the show would end. "I was told, 'You don't really show up for a few episodes, but it's all about you. They talk about you a lot.' "

Born David McDonald in the Scottish town of Bathgate in 1971, Tennant had an identity crisis early on. As a teenager he had to change his name because Equity, the union for UK actors, already had a David McDonald on its books. "It's not something I would have done by choice. I wasn't allowed my name, so I thought, What will I do?"

His parents wanted him to choose a family name, but the16-year-old thought otherwise. "I picked up a copy of Smash Hits and leafed through it to find some names I might like." One of the surnames that appealed belonged to Neil Tennant of Pet Shop Boys.

Later, when his Equity card arrived with his new identity printed on it, it made him feel "a bit sick". Legally, when it became complicated to have two names, he changed it officially. Now he says, "my family are all Tennants - it's in my bones."

Although Tennant has had some big movie work - Harry Potter and the Goblet of Fire, for example - he's most recognised for his TV roles.

In 2005 he became the 10th Dr Who and met his wife, Georgia Moffett, daughter of the fifth Dr Who, Peter Davison, on the set.

With Dr Who came a level of recognition that was "very different, very quickly". Suddenly he was public property. How did he cope? "It's ... You just sort of ... It's odd at first, because you don't get any help with it. No one trains you for that. So you have to find your way and find what works for you.

"You have to try and be consistent about your own personal rules, whether that's what you'll talk about in public, or what you'll do in public, or how you interact with people. People are mostly really nice, so you don't want to be an arse about it, but I do quite treasure having a normal life, you know ..."

He was lucky, he says, to have been working with Billie Piper, the child pop star turned actor, at the time. She had "had that life since she was about 14 ... I think I learned from her how to be and how to cope. There are very few people you can turn to."

Another lesson Tennant learned while playing the time-travelling doctor was how to keep his mouth shut. Netflix is notoriously strict on spoilers: actors are contractually sworn to secrecy, so as not to ruin the public binge watch. "I've already said too much," he half jokes about Jessica Jones.

He describes the Dr Who non-disclosure agreement as fearsome. He was gagged also while playing Alec Hardy, the detective in the ITV whodunnit Broadchurch. So, as he puts it, he's spent the past 10 years "not answering questions".

You have to wonder if the pay cheque from Marvel, which is owned by Disney, helped to sway the decision to take this new role. "Of course it's part of it. But hopefully - and I say this as if I know what I'm talking about, even though I'm terrible at thinking tactically when it comes to career - but you can construct a career where certain things will pay for you to do other things."

With his roll-the-dice approach to taking on new work, is it possible that he's missed out on parts he really wanted, or taken parts he lived to regret? "Oh yeah," he says, laughing and sensing a trap.

"Nah!" he says, his voice going up a few octaves, "you're all right. If I've ever turned things down and they've gone on to be big - and there have been a couple of them that you look back on and think, Hmm, maybe things would have gone in a different direction - you don't want to start talking about things, because obviously other people did take those roles."

Unsurprisingly, for someone who can't sit still, Tennant says he is not good at not working. "I can't sit at home. I worry about there never being another job. I sort of bumble along ... "

Next up is a reprisal of his role as Richard II for the Royal Shakespeare Company. The RSC's artistic director, Gregory Doran, has praised Tennant's facility with Shakespearean language. The challenge is to make words written 400 years ago relevant and resonant. "I enjoy wrestling with it and getting to the point where you are jazzing with it. It's something I really enjoy. They are the Olympic events of acting. I like that you can get a shot."

The downside is when you "turn up on the first night and think, What the f*** am I doing-why did I think this was a good idea? And you stand backstage in paroxysms of terror. It's that immediate thing of stepping out in front of 1,000 people and not making a mess of it."

Despite having played a time-travelling doctor and, after being asked for one too many selfies, considered the merits of invisibility, Tennant believes that, in Jessica Jones, his character's mind-controlling ability is the trump card of superpowers. In real life he's less sure what he'd do with it. "I like to think I'd talk to David Cameron and Mugabe. I like to think I'd do great things, but I'm sure I'd also get the odd free coffee. It's just whether you could trust yourself to use it admirably. That's the question."

The first series of Jessica Jones is avaiLabLe on Netflix

Caption: Purple reign: David Tennant as Kilgrave in the Marvel series Jessica Jones, which also stars Krysten Ritter (top left); Tennant learned from the child pop star turned actor Billie Piper, his costar in Doctor Who (above left), how to deal with fame