It's super, man, as the Doctor drops in for Christmas 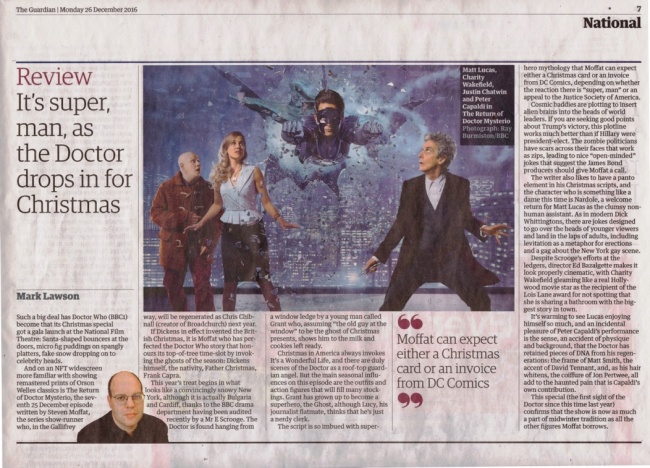 Such a big deal has Doctor Who (BBC1) become that its Christmas special got a gala launch at the National Film Theatre: Santa-shaped bouncers at the doors, micro fig puddings on spangly platters, fake snow dropping on to celebrity heads.

And on an NFT widescreen more familiar with showing remastered prints of Orson Welles classics is The Return of Doctor Mysterio, the seventh 25 December episode written by Steven Moffat, the series show-runner who, in the Gallifrey way, will be regenerated as Chris Chibnall (creator of Broadchurch) next year. If Dickens in effect invented the British Christmas, it is Moffat who has perfected the Doctor Who story that honours its top-of-tree time-slot by invoking the ghosts of the season: Dickens himself, the nativity, Father Christmas, Frank Capra. This year's treat begins in what looks like a convincingly snowy New York, although it is actually Bulgaria and Cardiff, thanks to the BBC drama department having been audited recently by a Mr E Scrooge. The Doctor is found hanging from a window ledge by a young man called Grant who, assuming "the old guy at the window" to be the ghost of Christmas presents, shows him to the milk and cookies left ready.

Christmas in America always invokes It's a Wonderful Life, and there are duly scenes of the Doctor as a roof-top guardian angel. But the main seasonal influences on this episode are the outfits and action figures that will fill many stockings. Grant has grown up to become a superhero, the Ghost, although Lucy, his journalist flatmate, thinks that he's just a nerdy clerk.

The script is so imbued with superhero mythology that Moffat can expect either a Christmas card or an invoice from DC Comics, depending on whether the reaction there is "super, man" or an appeal to the Justice Society of America.

Cosmic baddies are plotting to insert alien brains into the heads of world leaders. If you are seeking good points about Trump's victory, this plotline works much better than if Hillary were president-elect. The zombie politicians have scars across their faces that work as zips, leading to nice "open-minded" jokes that suggest the James Bond producers should give Moffat a call.

The writer also likes to have a panto element in his Christmas scripts, and the character who is something like a dame this time is Nardole, a welcome return for Matt Lucas as the clumsy nonhuman assistant. As in modern Dick Whittingtons, there are jokes designed to go over the heads of younger viewers and land in the laps of adults, including levitation as a metaphor for erections and a gag about the New York gay scene.

Despite Scrooge's efforts at the ledgers, director Ed Bazalgette makes it look properly cinematic, with Charity Wakefield gleaming like a real Hollywood movie star as the recipient of the Lois Lane award for not spotting that she is sharing a bathroom with the biggest story in town.

It's warming to see Lucas enjoying himself so much, and an incidental pleasure of Peter Capaldi's performance is the sense, an accident of physique and background, that the Doctor has retained pieces of DNA from his regenerations: the frame of Matt Smith, the accent of David Tennant, and, as his hair whitens, the coiffure of Jon Pertwee, all add to the haunted pain that is Capaldi's own contribution.

This special (the first sight of the Doctor since this time last year) confirms that the show is now as much a part of midwinter tradition as all the other figures Moffat borrows.