It's the gay Dr Who mafia 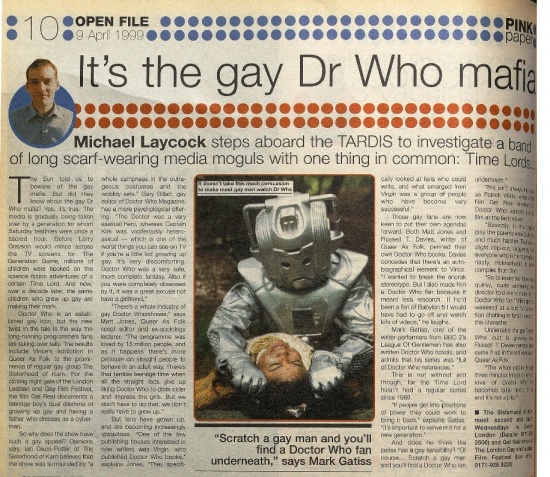 Michael Laycock steps aboard the TARDIS to investigate a band of long scarf-wearing media moguls with one thing in common: Time Lords...

The Sun told us to beware of the gay mafia. But did they know about the gay Dr Who mafia? Yes, it's true. The media is gradually being taken over by a generation for whom Saturday teatimes were once a sacred hour, Before Larry Grayson would mince across the TV screens for The Generation Game, millions of children were hooked on the science fiction adventures of a certain Time Lord. And now, over a decade later, the same children who grew up gay are making their mark.

Doctor Who is an established gay icon, but the new twist in the tale is the way the long-running programme's fans are taking over telly. The results include Vince's addiction in Queer As Folk to the prominence of regular gay group The Sisterhood of Karn. For the closing night gala of the London Lesbian and Gay Film Festival, the film Get Real documents a teenage boy's dual dilemma of growing up gay and having a father who dresses as a cyberman.

So why does the show have such a gay appeal? Opinions vary. Ian Dixon-Potter of The Sisterhood of Karn believes that the show was surrounded by "a whole campness in the outrageous costumes and the wobbly sets." Gary Gillett, gay editor of Doctor Who Magazine, has a more psychological offering. 'The Doctor was a very asexual hero, whereas Captain Kirk was vociferously heterosexual — which is one of the worst things you can see on TV if you're a little kid growing up gay. It's very discomforting. Doctor Who was a very safe, more complete fantasy. Also if you were completely obsessed by it, it was a great excuse not have a girlfriend."

"There's a whole industry of gay Doctor Whoishness," says Matt Jones, Queer As Folk script editor and ex-sociology lecturer. 'The programme was loved by 15 million people, and as it happens there's more pressure on straight people to behave in an adult way. There's that terrible teenage time when all the straight lads give up liking Doctor Who to drink cider and impress the girls. But we don't have to do that, we don't really have to grow up."

But fans have grown up, and are becoming increasingly ubiquitous. "One of the few publishing houses interested in new writers was Virgin, who published Doctor Who books," explains Jones. "They specifically looked at fans who could write, and what emerged from Virgin was a group of people who have become very successful."

Those gay fans are now keen to put their own agendas forward. Both Matt Jones and Russell T. Davies, writer of Queer As Folk, penned their own Doctor Who books. Davies concedes that there's an autobiographical element to Vince. "I wanted to break the anorak stereotype. But I also made him a Doctor Who fan because it meant less research. If he'd been a fan of Babylon 5 I would have had to go off and watch lots of videos," he laughs.

Mark Gatiss, one of the writer-performers from BBC 2's League Of Gentlemen has also written Doctor Who novels, and admits that his series was "full of Doctor Who references."

This is not without aim though, for the Time Lord hasn't had a regular series since 1989.

"If people get into positions of power they could work to bring it back," explains Gatiss. "It's important to reinvent it for a new generation."

And does he think the series has a gay sensibility? "Of course... Scratch a gay man and you'll find a Doctor Who fan underneath."

This isn't always the case as Patrick Wilde, writer of the film Get Real inserted the Doctor Who aspects into the film at the last minute.

"Basically, in the original play the parents were Catholics and much harsher. That was a slight cop-out, suggesting that everyone who is homophobic is nasty. Homophobia is more complex than that.

"So to make the father a bit quirky, quite endearing director told me to make him Doctor Who fan." Wilde spent a weekend at a cult TV convention, chatting to fans to research the character.

Undeniably the gay Doctor Who cult is growing, and Russell T. Davies perhaps best sums it up in the last episode of Queer As Folk.

"The whole plot in the last three minutes hinges on Vince's love of Doctor Who. He becomes quite heroic. In the end it's not a joke."

The Sisterhood of Karn meet second and fourth Wednesdays in Central London (Details: ) and Get Real shows at The London Gay and Lesbian Film Festival (box office: )

Caption: It doesn't take this much persuasion to make most gay teen watch Dr Who