It's time for Who 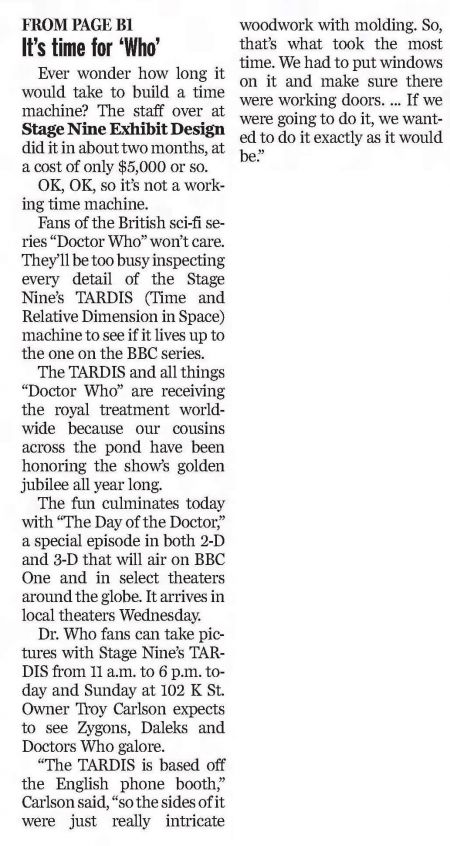 Ever wonder how long it would take to build a time machine? The staff over at Stage Nine Exhibit Design did it in about two months, at a cost of only $5,000 or so.

OK, OK, so it's not a working time machine.

Fans of the British sci-fi series "Doctor Who" won't care. They'll be too busy inspecting every detail of the Stage Nine's TARDIS (Time and Relative Dimension in Space) machine to see if it lives up to the one on the BBC series.

The TARDIS and all things "Doctor Who" are receiving the royal treatment worldwide because our cousins across the pond have been honoring the show's golden jubilee all year long.

The fun culminates today with "The Day of the Doctor," a special episode in both 2-D and 3-D that will air on BBC One and in select theaters around the globe. It arrives in local theaters Wednesday.

Dr. Who fans can take pictures with Stage Nine's TARDIS from 11 a.m. to 6 p.m. today and Sunday at 102 K St. Owner Troy Carlson expects to see Zygons, Daleks and Doctors Who galore.

"The TARDIS is based off the English phone booth," Carlson said, "so the sides of it were just really intricate woodwork with molding. So, that's what took the most time. We had to put windows on it and make sure there were working doors. ... If we were going to do it, we wanted to do it exactly as it would be."