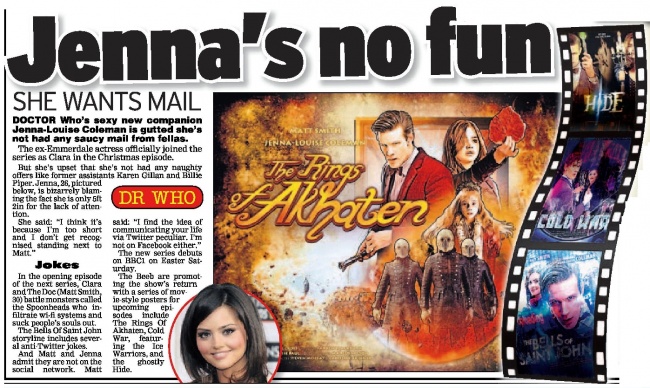 DOCTOR Who's sexy new companion Jenna-Louise Coleman is gutted she's not had any saucy mail from fellas. The ex-Emmerdale actress officially joined the series as Clara in the Christmas episode.

But she's upset that she's not had any naughty offers like former assistants Karen Gillan and Billie Piper. Jenna, 26, pictured below, is bizarrely blaming the fact she is only 5ft 2in for the lack of attention.

She said: "I think it's because I'm too short and I don't get recognised standing next to Matt."

In the opening episode of the next series, Clara and The Doc (Matt Smith, 30) battle monsters called the Spoonheads who infiltrate wi-fi systems and suck people's souls out. The Bells Of Saint John storyline includes several anti-Twitter jokes. And Matt and Jenna admit they are not on the social network. Matt

said: "I find the idea of communicating your life via Twitter peculiar. I'm not on Facebook either." The new series debuts on BBC1 on Easter Saturday.

The Beeb are promoting the show's return with a series of movie-style posters for upcoming episodes include The Rings Of Akhaten, Cold War, featuring the Ice Warriors, and the ghostly Hide.