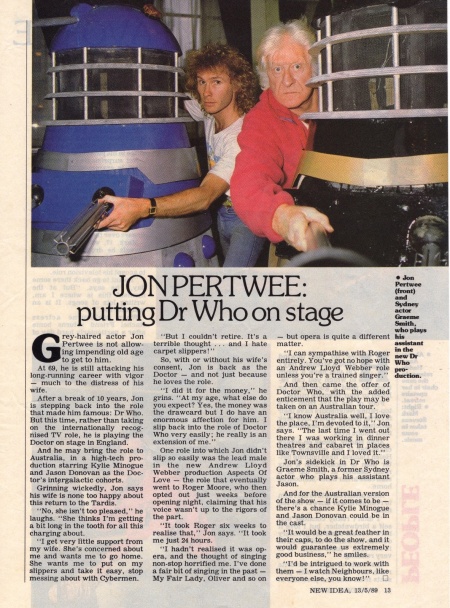 Grey-haired actor Jon Pertwee is not allowing impending old age to get to him. At 69, he is still attacking his long-running career with vigor — much to the distress of his wife.

After a break of 10 years, Jon is stepping back into the role that made him famous: Dr Who. But this time, rather than taking on the internationally recognised TV role, he is playing the Doctor on stage in England.

And he may bring the role to Australia, in a high-tech production starring Kylie Minogue and Jason Donovan as the Doctor's intergalactic cohorts.

Grinning wickedly, Jon says his wife is none too happy about this return to the Tardis.

"No, she isn't too pleased," he laughs. "She thinks I'm getting a bit long in the tooth for all this charging about.

"I get very little support from my wife. She's concerned about me and wants me to go home. She wants me to put on my slippers and take it easy, stop messing about with Cybermen.

"But I couldn't retire. It's a terrible thought ... and I hate carpet slippers!"

So, with or without his wife's consent, Jon is back as the Doctor — and not just because he loves the role.

"I did it for the money," he grins. "At my age, what else do you expect? Yes, the money was the drawcard but I do have an enormous affection for him. I slip back into the role of Doctor Who very easily; he really is an extension of me."

One role into which Jon didn't slip so easily was the lead male in the new Andrew Lloyd Webber production Aspects Of Love — the role that eventually went to Roger Moore, who then opted out just weeks before opening night, claiming that his voice wasn't up to the rigors of the part.

"It took Roger six weeks to realise that," Jon says. "It took me just 24 hours.

"I hadn't realised it was opera, and the thought of singing non-stop horrified me. I've done a fair bit of singing in the past —My Fair Lady, Oliver and so on — but opera is quite a different matter.

"I can sympathise with Roger entirely. You've got no hope with an Andrew Lloyd Webber role unless you're a trained singer."

And then came the offer of Doctor Who, with the added enticement that the play may be taken on an Australian tour.

"I know Australia well, I love the place, I'm devoted to it," Jon says. "The last time I went out there I was working in dinner theatres and cabaret in places like Townsville and I loved it."

Jon's sidekick in Dr Who is Graeme Smith, a former Sydney actor who plays his assistant Jason.

And for the Australian version of the show — if it comes to be —there's a chance Kylie Minogue and Jason Donovan could be in the cast.

"It would be a great feather in their caps, to do the show, and it would guarantee us extremely good business," he smiles.

"I'd be intrigued to work with them — I watch Neighbours, like everyone else, you know!"

Caption: Jon Pertwee (front) and Sydney actor Graeme Smith, who plays his assistant in the new Dr Who production.