Jury told of a 'Dr Who' and an invisible drug 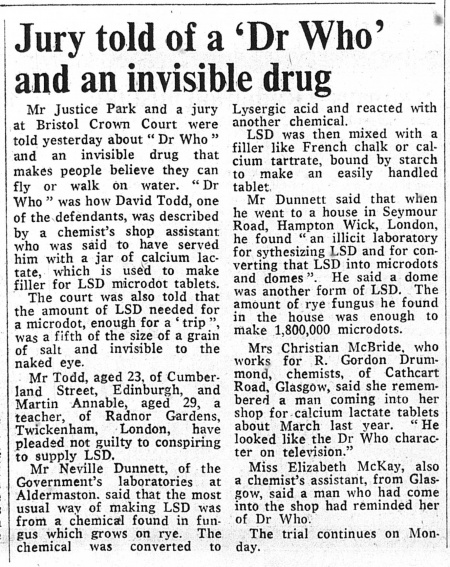 Mr Justice Park and a jury at Bristol Crown Court were told yesterday about " Dr Who " and an invisible drug that makes people believe they can fly or walk on water. " Dr Who " was how David Todd, one of the defendants, was described by a chemist's shop assistant who was said to have served him with a jar of calcium lactate, which is used to make filler for LSD microdot tablets.

The court was also told that the amount of LSD needed for a microdot, enough for a ' trip ", was a fifth of the size of a grain of salt and invisible to the naked eye.

Mr Neville Dunnett, of the Government's laboratories at Aldermaston. said that the most usual way of making LSD was from a chemical found in fungus which grows on rye. The chemical was converted to Lysergic acid and reacted with another chemical.

LSD was then mixed with a filler like French chalk or calcium tartrate, bound by starch to make an easily handled tablet.

Mr Dunnett said that when he went to a house in Seymour Road, Hampton Wick, London, he found " an illicit laboratory for sythesizing LSD and for converting that LSD into microdots and domes ". He said a dome was another form of LSD. The amount of rye fungus he found in the house was enough to make 1,800,000 microdots.

Mrs Christian McBride, who works for R. Gordon Drummond, chemists, of Cathcart Road, Glasgow, said she remembered a man coming into her shop for-calcium lactate tablets about March last year. " He looked like the Dr Who character on television."

Miss Elizabeth McKay, also a chemist's assistant, from Glasgow, said a man who had come into the shop had reminded her of Dr Who.

The trial continues on Monday.