K9 is back and ready to fight in shining armour 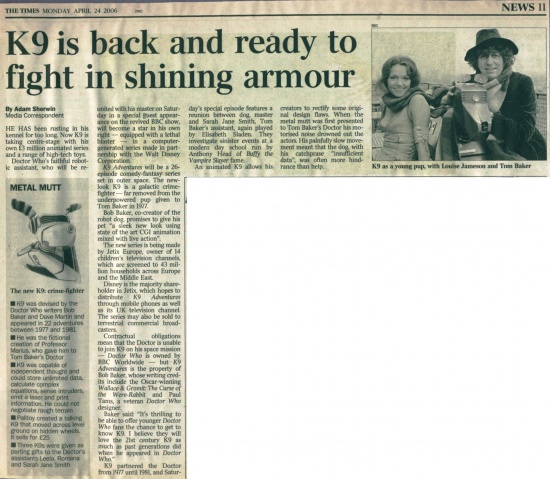 HE HAS been rusting in his kennel for too long. Now K9 is taking centre-stage with his own £3 million animated series and a range of high-tech toys. Doctor Who's faithful robotic assistant. who will be reunited with his master on Saturday in a special guest appearance on the revived BBC show, will become a star in his own right — equipped with a lethal blaster — in a computer-generated series made in partnership with the Walt Disney Corporation.

K9 Adventures will be a 26-episode comedy-fantasy series set in outer space. The new. look K9 is a galactic crimefighter — far reproved from the underpowered pup given In Tom Baker in 1977.

Bob Baker, co-creator of the robot dog, promises to give his pet "a sleek new look using state of the art CGI animation mixed with live action".

The new series is being made by Jetix Europe, owner of 14 children's television channels. which are screened to 43 million households across Europe and the Middle East.

Disney is the majority shareholder in Jetix, which hopes to distribute K9 Adventures through mobile phones as well as its UK television channel. The series may also be sold to terrestrial commercial broadcasters.

Contractual obligations mean that the Doctor is unable to join K9 on his space mission — Doctor Who is owned by BBC Worldwide — but K9 Adventures is the property of Bob Baker, whose writing credits include the Oscar-winning Wallace & Gromit The Curse of the Were-Rabbit and Paul Tams, a veteran Doctor Who' designer.

Baker said: "It's thrilling to be able to offer younger Doctor Who fans the chance to get to know 1£9. I believe they will love the 21st century KO as much as past generations did when he appeared in Doctor Who:

An animated K9 allows his creators to rectify some original design flaws. When the metal mutt was first presented to Tom Baker's Doctor his motorised noise drowned out the actors. His painfully slow movement meant that the dog, with his catchphrase "insufficient data", was often more hindrance than help.

Caption: K9 as a young pup, with Louise Jameson and Tom Baker