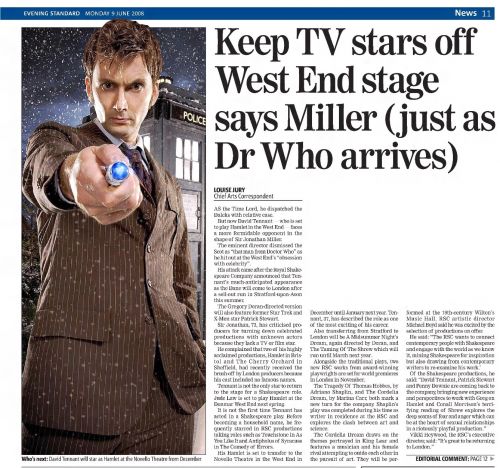 AS the Time Lord, he dispatched the Daleks with relative ease.

But now David Tennant — who is set to play Hamlet in the West End — faces a more formidable opponent in the shape of Sir Jonathan Miller.

The eminent director dismissed the Scot as "that man from Doctor Who" as he hit out at the West End's "obsession with celebrity".

His attack came after the Royal Shakespeare Company announced that Tennant's much-anticipated appearance as the Dane will come to London after a sell-out run in Stratford-upon-Avon this summer.

Sir Jonathan, 73, has criticised producers for turning down celebrated productions with unknown actors because they lack a TV or film star. He complained that two of his highly acclaimed productions, Hamlet in Bristol and The Cherry Orchard in Sheffield, had recently received the brush-off by London producers because his cast included no famous names. Tennant is not the only star to return to the stage for a Shakespeare role. Jude Law is set to play Hamlet at the Donmar West End next spring.

It is not the first time Tennant has acted in a Shakespeare play. Before becoming a household name, he frequently starred in RSC productions taking roles such as Touchstone in As You Like It and Antipholus of Syracuse in The Comedy of Errors.

His Hamlet is set to transfer to the Novello Theatre in the West End in December until January next year. Tennant, 37, has described the role as one of the most exciting of his career.

Also transferring from Stratford to London will be A Midsummer Night's Dream, again directed by Doran, and The Taming Of The Shrew which will run until March next year.

Alongside the traditional plays, two new RSC works from award-winning playwrights are set for world premieres in London in November.

The Tragedy Of Thomas Hobbes, by Adriano Shaplin, and The Cordelia Dream, by Marina Carr, both mark a new turn for the company. Shaplin's play was completed during his time as writer in residence at the RSC and explores the clash between art and science.

The Cordelia Dream draws on the themes portrayed in King Lear and features a musician and his female rival attempting to outdo each other in the pursuit of art. They will be performed at the 19th-century Wilton's Music Hall. RSC artistic director Michael Boyd said he was excited by the selection of productions on offer.

He said: "The RSC wants to connect contemporary people with Shakespeare and engage with the world as we know it, mining Shakespeare for inspiration but also drawing from contemporary writers to re-examine his work.'

Of the Shakespeare productions, he said: "David Tennant, Patrick Stewart and Penny Downie are coming back to the company, bringing new experience and perspectives to work with Greg on Hamlet and Conall Morrison's terrifying reading of Shrew explores the deep seams of fear and anger which can be at the heart of sexual relationships in a riotously playful production." Vikki Heywood, the RSC's executive director, said: "It's great to be returning to London."

Caption: Who's next: David Tennant will star as Hamlet at the Novello Theatre from December