Knock, knock, Dr Who's there 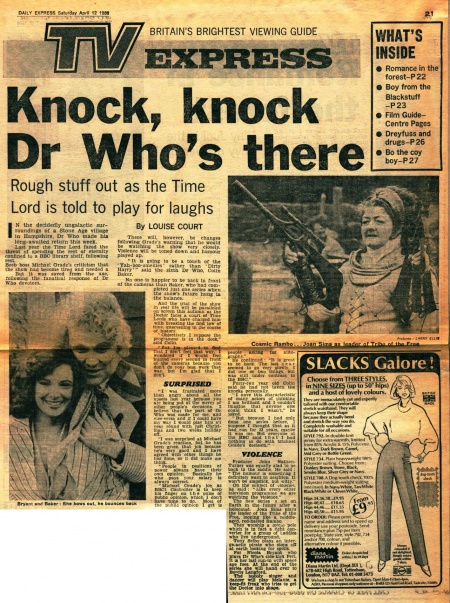 IN the decidedly ungalactic surroundings of a Stone Age village in Hampshire, Dr Who made his long-awaited return this week.

Last year the Time Lord faced the threat of spending the rest of eternity confined to a BBC library shelf, following rest.

But it was saved from the axe, following the fanatical response of Dr Who devotees.

There will, however, be changes following Grade's warning that he would be watching the show very closely. Violence will be toned down and humour played up.

"It is going to be a touch of the 'Yah-boo-smellies' rather than 'Dirty Harry'" said the sixth Dr Who, Colin Baker.

No one is happier to be back in front of the cameras than Baker, who had completed just one series when the show's future hung in the balance.

And the trial of the show in real life will be paralleled on screen this autumn as the Doctor faces a court of Time Lords who have charged him with breaking the first law of time, intervening in the course of history.

"Objectively I suppose the programme is in the dock," said Colin.

"But I'm pleased to find that I don't feel that way. I wondered if I would feel hunted every second in front of the cameras because you don't do your best work that way, but I'm glad that I don't.

"I was frustrated more than angry about all the upsets last year because you are being put at the mercy of other people's decisions. I believe that the part of Dr Who was made for me, and vice-versa and if I could have my way I would play him all year round with just Christmas and two weeks holiday off.

"I was surprised at Michael Grade's reaction, but he has been given that job because he's very good and I have agreed with other things he has done, so it did make me think.

"People in positions of power always have their own opinion. Basically he who pays your salary is always correct.

"Michael Grade's job as BBC1 Controller is to keep his finger on t h e pulse of public opinion, which I don't have time to do. Most of the public opinion I get is people asking for autographs."

He continued : "It is great to be back. The last year seemed to go very slowly. I did one or two things, but was still under contract to the BBC."

Forty-two year old Colin said he had not taken the knocks personally.

"I have this characteristic of many actors of thinking I am brilliant and I couldn't imagine that anyone else could think I wasn't," he joked.

"But because I had only done one series before, I suppose I thought that as it had run for 23 years, maybe it was me. But everyone at the BBC said that I had nothing to do with Michael Grade's decision."

Producer John Nathan-Turner was equally glad to be back in the saddle. He said : "The humour is something I definitely want to heighten. It won't be slapstick, cut witty."

On the subject of violence?, he said : "Like every other television programme we are watching the violence."

The new series is set on Earth in the future after a holocaust. Joan Sims plays the leader of the Tribe of the File, looking like a middle-aged, red-haired Rambo.

They worship a totem pole which is in fact a light converter for a group of baddies who live underground.

Tony Selby plays an inter-galactic pirate who stops off at earth looking for spoils.

For Nicola Bryant who plays Dr Who's side-kick Peri, it is her last run-in with space age foes. At the end of the series she will hand ever to Bonny Langford.

The bubbly singer and dancer will play Melanie, a keep-fit freak who tries to get the Doctor into shape.

Caption: Bryant and Baker : She bows out, he bounces back

Caption: Cosmic Rambo ... Joan Sims as leader of Tribe of the Free