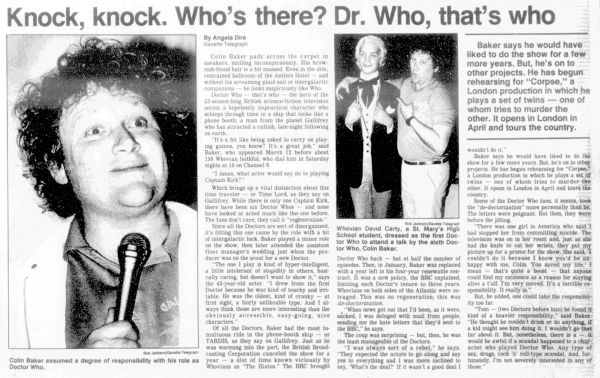 Colin Baker pads across the carpet in sneakers. smiling inconspicuously. His brownish-blond hair is a bit mussed. Even in the dim, restrained ballroom of the Antlers Hotel — and without his screaming plaid suit or intergalactic companions — he looks suspiciously like Who.

Doctor Who — that's who — the hero of the 23-season-long British science-fiction television series; a hopelessly impractical character who schleps through time in a ship that looks like a phone booth; a man from the planet Gallifrey who has attracted a cultish, late-night following on earth.

"It's a bit like being asked to carry on playing games, you know? It's a great job," said Baker, who appeared March 12 before about 150 Whovian faithful, who dial him in Saturday nights at 10 on Channel 8.

"I mean, what actor would say no to playing Captain Kirk?"

Which brings up a vital distinction about this time traveler — or Time Lord, as they say on Gallifrey. While there is only one Captain Kirk, there have been six Doctor Whos — and none have looked or acted much like the one before. The fans don't care; they call it "regeneration."

Since all the Doctors are sort of disorganized, it's fitting this one came by the role with a bit of intergalactic luck. Baker played a minor role on the show, then later attended the assistant floor manager's wedding just when the producer was on the scout for a new Doctor.

"The one I play is kind of hyper-intelligent, a little intolerant of stupidity in others, basically caring, but doesn't want to show it," says the 43-year-old actor. "I drew from the first Doctor because he was kind of touchy and irritable. He was the oldest, kind of cranky — at first sight, a fairly unlikeable type. And I always think those are more interesting than the obviously accessible. easy-going, nice characters."

Of all the Doctors, Baker had the most tumultuous ride in the phone-booth ship — or TARDIS, as they say on Gallifrey. Just as he was warming into the part, the British Broadcasting Corporation canceled the show for a year -- a slot of time known viciously by Whovians as "The Hiatus." The BBC brought Doctor Who back — but at half the number of episodes. Then, in January, Baker was replaced with a year left in his four-year renewable contract. It was a new policy, the BBC explained, limiting each Doctor's tenure to three years. Whovians on both sides of the Atlantic were outraged: This was no regeneration; this was de-doctor ration.

"When news got out that I'd been, as it were, sacked, I was deluged with mail from people, sending me the bate letters that they'd sent to the BBC," he says.

The coup was surprising -- but, then, he was the least manageable of the Doctors.

"I was always sort of a rebel," he says. "They expected the actors to go along and say yes to everything and I was more inclined to say, 'What's the deal?' If it wasn't a good deal I wouldn't do it."

Baker says he would have liked to do the show for a few more years. But, he's on to other projects. He has begun rehearsing for "Corpse," a London production in which he plays a set of twins — one of whom tries to murder the other. It opens in London in April and tours the country.

Some of the Doctor Who fans, it seems, took the "de-doctorization" more personally than he. The letters were poignant. But then, they were before the jilting.

"There was one girl in America who said I had stopped her from committing suicide. The television was on in her room and, just as she had the knife to cut her wrists, they put my picture up for a promo for the show. She said, 'I couldn't do it because I know you'd be unhappy with me, Colin. You saved my life.' I mean - that's quite a boost — that anyone could find my existence as a reason for staying alive a Call I'm very moved. It's a terrible responsibility. It really is."

But, he added, one could take the responsibility too far.

"Tom — (two Doctors before him) he found it kind of a heavier responsibility," said Baker. "He thought he couldn't drink or do anything. if a kid might see him doing it. I wouldn't go that far about it. But, nonetheless, there is a — it would be awful if a scandal happened to a character who played Doctor Who. Any type of sex, drugs, rock 'n' roll-type scandal. And, fortunately, I'm not severely interested in any of those."

Caption: Colin Baker assumed a degree of responsibility with his role as Doctor Who.

Caption: Whovian David Carty, a St. Mary's High School student, dressed as the first Doctor Who to attend a talk by the sixth Doctor Who, Colin Baker.