Last time in Tardis for Doctor Who's Coleman 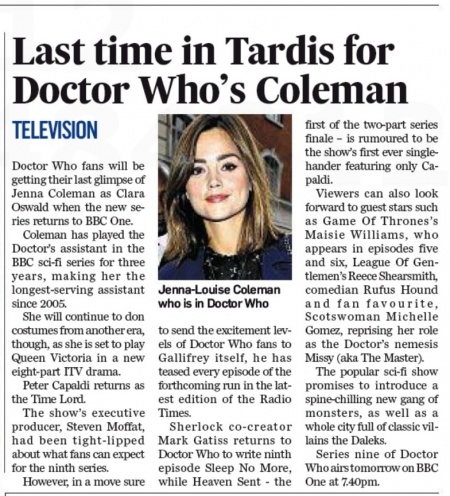 Doctor Who fans will be getting their last glimpse of Jenna Coleman as Clara Oswald when the new series returns to BBC One.

Coleman has played the Doctor's assistant in the BBC sci-fi series for three years, making her the longest-serving assistant since 2005.

She will continue to don costumes from another era, though, as she is set to play Queen Victoria in a new eight-part ITV drama.

The show's executive producer, Steven Moffat, had been tight-lipped about what fans can expect for the ninth series.

However, in a move sure to send the excitement levels of Doctor Who fans to Gallifrey itself, he has teased every episode of the forthcoming run in the latest edition of the Radio Times.

Sherlock co-creator Mark Gatiss returns to Doctor Who to write ninth episode Sleep No More, while Heaven Sent - the first of the two-part series finale – is rumoured to be the show's first ever single-hander featuring only Capaldi.

Viewers can also look forward to guest stars such as Game Of Thrones's Maisie Williams, who appears in episodes five and six, League Of Gentlemen's Reece Shearsmith, comedian Rufus Hound and fan favourite, Scotswoman Michelle Gomez, reprising her role as the Doctor's nemesis Missy (aka The Master).

The popular sci-fi show promises to introduce a spine-chilling new gang of monsters, as well as a whole city full of classic villains the Daleks.

Series nine of Doctor Who airs tomorrow on BBC One at 7.40pm.