Leaps of time and missed targets 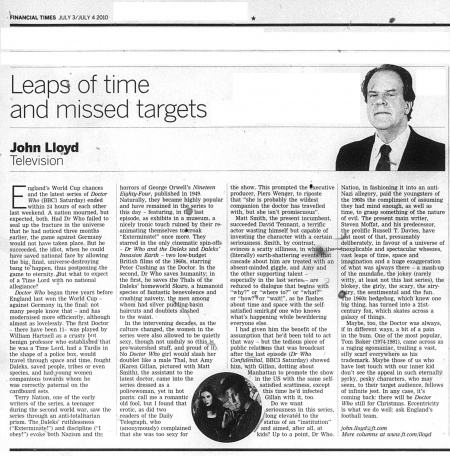 England's World Cup chances and the latest series of Doctor Who (BBC1 Saturday) ended within 24 hours of each other last weekend. A nation mourned, but expected, both. Had Dr Who failed to seal up the fracture in the universe that he had noticed three months earlier, the game against Germany would not have taken place. But he succeeded, the idiot, when he could have saved national face by allowing the big, final, universe-destroying bang to happen, thus postponing the game to eternity. But what to expect of a Time Lord with no national allegiance?

Doctor Who began three years before England last won the World Cup - against Germany in the final: not many people know that - and has modernised more efficiently, although almost as lovelessly. The first Doctor - there have been 11- was played by William Hartnell as a crusty but benign professor who established that he was a Time Lord, had a Tardis in the shape of a police box, would travel through space and time, fought Daleks, saved people, tribes or even species, and had young women companions towards whom he was correctly paternal on the cardboard sets.

Terry Nation, one of the early writers of the series, a teenager during the second world war, saw the series through an anti-totalitarian prism. The Daleks' ruthlessness ("Exterminate!") and discipline ("I obey!") evoke both Nazism and the horrors of George Orwell's Nineteen Eighty-Four , published in 1949. Naturally, they became highly popular and have remained in the series to this day - featuring, in the last episode, as exhibits in a museum, a nicely ironic touch ruined by their re-animating themselves to croak "Exterminate!" once more. They starred in the only cinematic spin-offs - Dr Who and the Daleks and Daleks' Invasion Earth - two low-budget British films of the 1960s, starring Peter Cushing as the Doctor. In the second, Dr Who saves humanity; in the first, he saves the Thals of the Daleks' homeworld Skaro, a humanoid species of fantastic benevolence and crashing naivety, the men among whom had silver pudding-basin haircuts and doublets slashed to the waist.

In the intervening decades, as the culture changed, the women in the series were also allowed to be quietly sexy, though not unduly so (this is pre-watershed stuff, and proud of it). No Doctor Who girl would slash her doublet like a male Thal, but Amy (Karen Gillan, pictured with Matt Smith), the assistant to the latest doctor, came into the series dressed as a policewoman, yet in hot pants: call me a romantic old fool, but I found that erotic, as did two readers of the Daily Telegraph, who (anonymously) complained that she was too sexy for the show. This prompted the executive producer, Piers Wenger, to riposte that "she is probably the wildest companion the doctor has travelled with, but she isn't promiscuous".

Matt Smith, the present incumbent, succeeded David Tennant, a terrific actor wasting himself but capable of investing the character with a certain seriousness. Smith, by contrast, evinces a scatty silliness, in which the (literally) earth-shattering events that cascade about him are treated with an absent-minded giggle, and Amy and the other supporting talent - especially in the last series - are reduced to dialogue that begins with "why?" or "where to?" or "what?" or "how?" or "wait!", as he flashes about time and space with the self-satisfied smirk of one who knows what's happening while bewildering everyone else.

I had given him the benefit of the assumption that he'd been told to act that way - but the tedious piece of public relations that was broadcast after the last episode (Dr Who Confidential, BBC3 Saturday) showed him, with Gillan, dotting about Manhattan to promote the show in the US with the same self-satisfied scattiness, except this time he'd infected Gillan with it, too.

Do we want seriousness in this series, long elevated to the status of an "institution" and aimed, after all, at kids? Up to a point, Dr Who. Nation, in fashioning it into an anti-Nazi allegory, paid the youngsters of the 1960s the compliment of assuming they had mind enough, as well as time, to grasp something of the nature of evil. The present main writer, Steven Moffat, and his predecessor, the prolific Russell T. Davies, have lost most of that, presumably deliberately, in favour of a universe of inexplicable and spectacular wheezes, vast leaps of time, space and imagination and a huge exaggeration of what was always there - a mash-up of the mundane, the jokey (rarely witty, at least not this last series), the blokey, the girly, the scary, the airy-fairy, the sentimental and the fun. The 1960s hedgehog, which knew one big thing, has turned into a 21st-century fox, which skates across a galaxy of things.

Maybe, too, the Doctor was always, if in different ways, a bit of a pain in the bum. One of the most popular, Tom Baker (1974-1981), came across as a raging egomaniac, trailing a vast, silly scarf everywhere as his trademark. Maybe those of us who have lost touch with our inner kid don't see the appeal in such eternally perky, pesky characters, who may seem, to their target audience, fellows of infinite jest. In any case, it's coming back: there will be Doctor Who still for Christmas. Eccentricity is what we do well: ask England's football team. john.lloyd@ft.com More columns at www.ft.com/lloyd