Lectures focus on The City 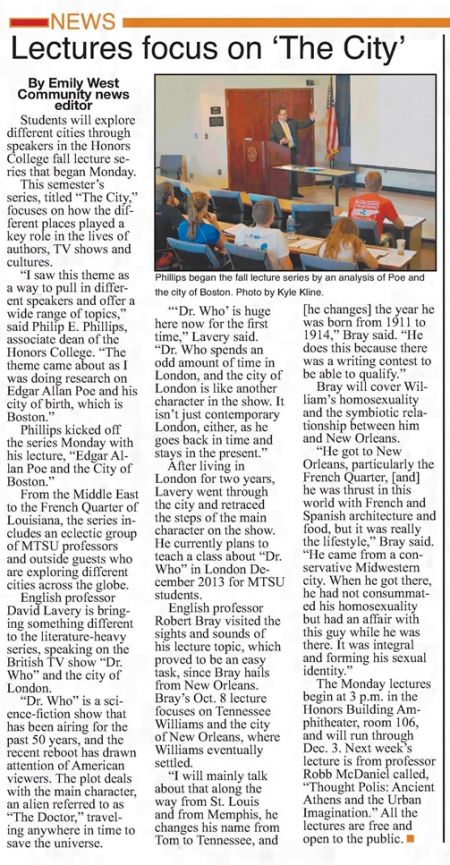 Phillips began the fall lecture series by an analysis of Poe and the city of Boston.

This semester's series, titled "The City," focuses on how the different places played a key role in the lives of authors, TV shows and cultures.

"I saw this theme as a way to pull in different speakers and offer a wide range of topics," said Philip E. Phillips, associate dean of the Honors College. "The theme came about as I was doing research on Edgar Allan Poe and his city of birth, which is Boston."

Phillips kicked off the series Monday with his lecture, "Edgar Allan Poe and the City of Boston."

From the Middle East to the French Quarter of Louisiana, the series includes an eclectic group of MTSU professors and outside guests who are exploring different cities across the globe.

English professor David Lavery is bringing something different to the literature-heavy series, speaking on the British TV show "Dr. Who" and the city of London.

"Dr. Who" is a science-fiction show that has been airing for the past 50 years, and the recent reboot has drawn attention of American viewers. The plot deals with the main character, an alien referred to as "The Doctor," traveling anywhere in time to save the universe.

"'Dr. Who' is huge here now for the first time," Lavery said. "Dr. Who spends an odd amount of time in London, and the city of London is like another character in the show. It isn't just contemporary London, either, as he goes back in time and stays in the present."

After living in London for two years, Lavery went through the city and retraced the steps of the main character on the show. He currently plans to teach a class about "Dr. Who" in London December 2013 for MTSU students.

English professor Robert Bray visited the sights and sounds of his lecture topic, which proved to be an easy task, since Bray hails from New Orleans. Bray's Oct. 8 lecture focuses on Tennessee Williams and the city of New Orleans, where Williams eventually settled.

"I will mainly talk about that along the way from St. Louis and from Memphis, he changes his name from Tom to Tennessee, and [he changes] the year he was born from 1911 to 1914," Bray said. "He does this because there was a writing contest to be able to qualify."

Bray will cover William's homosexuality and the symbiotic relationship between him and New Orleans.

"He got to New Orleans, particularly the French Quarter, [and] he was thrust in this world with French and Spanish architecture and food, but it was really the lifestyle," Bray said. "He came from a conservative Midwestern city. When he got there, he had not consummated his homosexuality but had an affair with this guy while he was there. It was integral and forming his sexual identity."

The Monday lectures begin at 3 p.m. in the Honors Building Amphitheater, room 106, and will run through Dec. 3. Next week's lecture is from professor Robb McDaniel called, "Thought Polis: Ancient Athens and the Urban Imagination." All the lectures are free and open to the public.