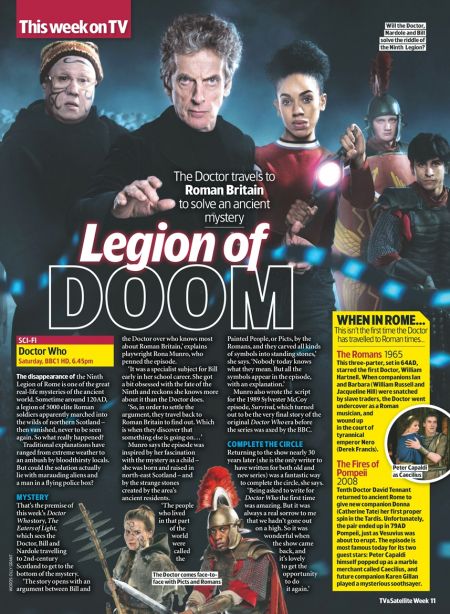 Will the Doctor, Nardole and Bill solve the riddle of the Ninth Legion?

The Doctor travels to Roman Britain to solve an ancient mystery

The disappearance of the Ninth Legion of Rome is one of the great real-life mysteries of the ancient world. Sometime around 120AD, a legion of 5000 elite Roman soldiers apparently marched into the wilds of northern Scotland — then vanished, never to be seen again. So what really happened?

Traditional explanations have ranged from extreme weather to an ambush by bloodthirsty locals. But could the solution actually lie with marauding aliens and a man in a flying police box?

That's the premise of this week's Doctor Who story, The Eaters of Light which sees the Doctor, Bill and Nardole travelling to 2nd-century Scotland to get to the bottom of the mystery.

'The story opens with an argument between Bill and the Doctor over who knows most about Roman Britain,' explains playwright Rona Munro, who penned the episode.

'It was a specialist subject for Bill early in her school career. She got a bit obsessed with the fate of the Ninth and reckons she knows more about it than the Doctor does.

'So, in order to settle the argument, they travel back to Roman Britain to find out. Which is when they discover that something else is going on...'

Munro says the episode was inspired by her fascination with the mystery as a child — she was born and raised in north-east Scotland — and by the strange stones created by the area's ancient residents.

'The people who lived in that that part of the world were called the Painted People, or Picts, by the Romans, and they carved all kinds of symbols into standing stones,' she says. 'Nobody today knows what they mean. But all the symbols appear in the episode, with an explanation.'

Munro also wrote the script for the 1989 Sylvester McCoy episode, Survival, which turned out to be the very final story of the original Doctor Who era before the series was axed by the BBC.

Returning to the show nearly 30 years later (she is the only writer to have written for both old and new series) was a fantastic way to complete the circle, she says.

'Being asked to write for Doctor Who the first time was amazing. But it was always a real sorrow to me that we hadn't gone out on a high. So it was wonderful when the show came back, and it's lovely to get the opportunity to do it again!

This isn't the first time the Doctor has travelled to Roman times...

This three-parter, set in 64AD, starred the first Doctor, William Hartnell. When companions Ian and Barbara (William Russell and Jacqueline Hill) were snatched by slave traders, the Doctor went undercover as a Roman musician, and wound up in the court of tyrannical emperor Nero (Derek Francis).

The Fires of Peter Capaldi

Tenth Doctor David Tennant returned to ancient Rome to give new companion Donna (Catherine Tate) her first proper spin in the Tardis. Unfortunately, the pair ended up in 79AD Pompeii, just as Vesuvius was about to erupt. The episode is most famous today for its two guest stars: Peter Capaldi himself popped up as a marble merchant called Caecilius, and future companion Karen Gillan played a mysterious soothsayer.

Caption: The Doctor comes face-to-face with Picts and Romans