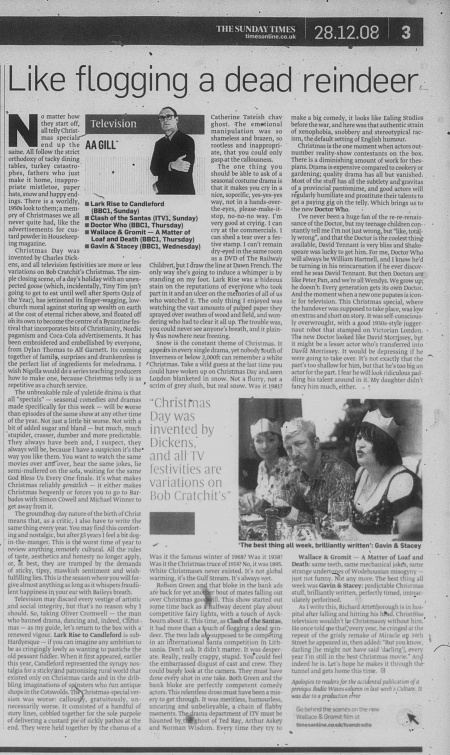 Which brings us to the new Doctor Who.

I've never been a huge fan of the re-re-renaissance of the Doctor, but my teenage children constantly tell me I'm not just wrong, but "like, totally wrong", and that the Doctor is the coolest thing available, David Tennant is very bliss and Shakespeare was lucky to get him. For me, Doctor Who will always be William Hartnell, and I know he'd be turning in his reincarnation if he ever discovered he was David Tennant. But then Doctors are like Peter. Pan, and we're all Wendys. We grow up; he doesn't: Every generation gets its own Doctor. And the moment when a new one pupates is iconic for television. This Christmas special, where the handover was supposed to take place, was low on extras and short on story. It was self-consciously overwrought, with a good 1930s-style juggernaut robot that stamped on Victorian London. Thu new Doctor looked like David Morrissey, but it might be a lesser actor who's transferred into David Morrissey. It would be depressing if he were going to take over. it's not exactly that the part's too shallow for him, but that he's too big an actor for the part. I fear he will look ridiculous paddling his talent around in it. My daughter didn't fancy him much, either.