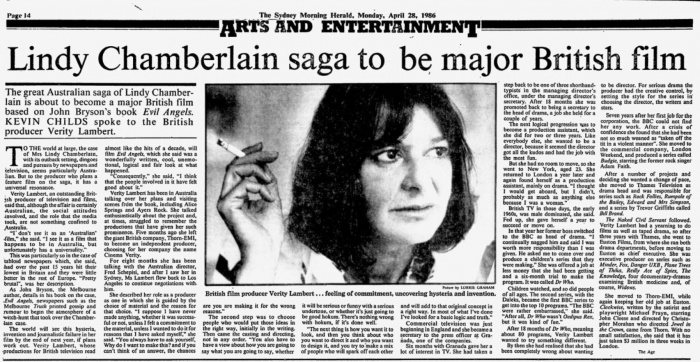 The great Australian saga of Lindy Chamberlain is about to become a major British film based on John Bryson's book Evil Angels. KEVIN CHILDS spoke to the British producer Verity Lambert.

TO THE world at large, the case of Mrs Lindy Chamberlain, with its outback setting, dingoes and pursuits by newspapers and television, seems particularly Australian. But to the producer who plans a feature film on the saga, it has a universal resonance.

Verity Lambert, an outstanding British producer of television and films, said that, although the affair is certainly Australian. the social attitudes involved, and the role that the media took, are not something confined to Australia.

"I don't see it as an 'Australian' film," she said. "I see it as a film that happens to be in Australia, but unfortunately has a universality."

This was particularly so in the case of tabloid newspapers which, site said, had over the past 15 years hit their lowest in Britain and they were little better in the rest of Europe. "Pretty brutal", was her description.

As John Bryson, the Melbourne author, details in his book on the case, Evil Angels, newspapers such as the Melbourne Truth printed gossip and rumour to begin the atmosphere of a witch-hunt that took over the Chamberlain case.

The world will see this hysteria, invention and journalistic failure in her film by the end of next year, if plans work out. Verity Lambert, whose productions for British television read almost like the hits of a decade, will film Evil Angels, which she said was a wonderfully written, cool, unemotional, logical and fair look at what happened.

"Consequently," she said, "I think that the people involved in it have felt good about it."

Verity Lambert has been in Australia talking over her plans and visiting scenes from the book, including Alice Springs and Ayers Rock. She talked enthusiastically about the project and, at times, struggled to remember the productions that have given her such prominence. Five months ago she left the giant British company, Thom-EMI, to become an independent producer, choosing for her company the name Cinema Verity.

For eight months she has been talking with the Australian director, Fred Schepisi, and after I saw her in Sydney. Ms Lambert flew back to Los Angeles to continue negotiations with. him.

She described her role as a producer as one in which she is guided by the choice of material and the reason for that choice. "I suppose I have never made anything, whether it was successful or not, unless I felt a commitment to the material, unless I wanted to do it for reasons that I have asked myself." she said. "You always have to ask yourself, Why do I want to make this? and if you can't think of an answer, the chances are you are making it for the wrong reasons."

The second step was to choose people who would put those ideas in the right way, initially in the writing. Then came the casting and directing, not in any order. "You also have to have a view about how you are going to say what you are going to say. whether it will be serious or funny with a serious undertone, or whether it's just going to be good hokum. There's nothing wrong with hokum, if it's done well.

"The next thing is how you want it to look, and then you think about who you want to direct it and who you want to design it, and you try to 'make a mix of people who will spark off each other and will add to that original concept in a right way. In most of what I've done I've looked for a basic logic and truth." Commercial television was just beginning in England and she became a secretary to the press officer at Granada, one of the companies.

The next logical progression was to become a production assistant, which she did for two or three years. Like everybody else, she wanted to be a director, because it seemed the director got all the kudos and had the job with the most fun.

But she had no room to move, so she went to New York, aged 23. She returned to London a year later and again found herself as a production assistant, mainly on drama. "I thought I would get aboard, but I didn't. probably as much as anything else because I was a woman."

British TV in those days, the early 1960s, was male dominated, she said. Fed up, she gave herself a year to succeed or move on.

In that year her former boss switched to the BBC as head of drama. "I continually nagged him and said I was worth more responsibility than I was given. He asked me to come over and produce a children's series that they were making." She was offered a job at less money that she had been getting and a six-month trial to make the program. It was called Dr Who.

Children watched, and so did people of all ages. The second series, with the Daleks, became the first BBC series to get into the top 10 programs. "The BBC were rather embarrassed," she said. "After all, Dr Who wasn't Oedipus Rex, but it was kind of fun."

After 18 months of Dr Who, meaning about 80 programs, Verity Lambert wanted to try something different.

By then she had realised that she had been completely wrong about wanting to be director. For serious drama the producer had the creative control, by setting the style for the series in choosing the director, the writers and stars.

Seven years after her first job for the corporation, the BBC could not find her any work. After a crisis of confidence she found that she had been not so much weaned as "taken off the tit in a violent manner". She moved to the commercial company, London Weekend, and produced a series called Budgie, starring the former rock singer Adam Faith.

After a number of projects and deciding she wanted a change of pace, she moved to Thames Television as drama head and was responsible for series such as Rock Follies, Rumpole of the Bailey, Edward and Mrs Simpson, and a series by Trevor Griffiths called Bill Brand.

The Naked Civil Servant followed. Verity Lambert had a yearning to do films as well as taped drama, so after three years with Thames, she went to Euston Films, from where she ran both drama departments, before moving to Euston as chief executive. She was executive producer on series such as Minder, Fox, Danger UXB , Plane Trees of Thicka, Reilly Ace of Spies, The Knowledge, four documentary-dramas examining British medicine and, of course, Widows.

She moved to Thorn-EM1, while again keeping her old job at Euston. Clockwise, written by the satirist and playwright Michael Frayn, starring John Cleese and directed by Christopher Morahan who directed Jewel in the Crown, came from Thorn. With no small satisfaction, she said that it has just taken S3 million in three weeks in London.