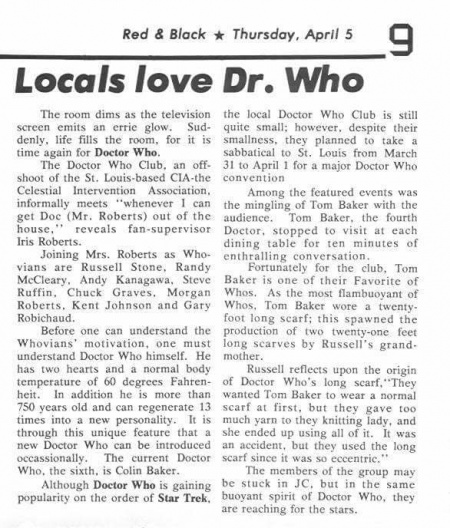 The room dims as the television screen emits an eerie glow. Suddenly, life fills the room, for it is time again for Doctor Who.

The Doctor Who Club, an offshoot of the St. Louis-based CIA-the Celestial Intervention Association, informally meets — whenever I can get Doc (Mr. Roberts) out of the house — reveals fan-supervisor Iris Roberts.

Before one can understand the Whovians' motivation, one must understand Doctor Who himself. He has two hearts and a normal body temperature of 60 degrees Fahrenheit. In addition he is more than 750 years old and can regenerate 13 times into a new personality. It is through this unique feature that a new Doctor Who can be introduced occasionally. The current Doctor Who, the sixth, is Colin Baker.

Although Doctor Who is gaining popularity on the order of Star Trek, the local Doctor Who Club is still quite small; however, despite their smallness, they planned to take a sabbatical to St. Louis from March 31 to April 1 for a major Doctor Who convention.

Among the featured events was the mingling of Tom Baker with the audience. Tom Baker, the fourth Doctor, stopped to visit at each dining table for ten minutes of enthralling conversation.

Fortunately for the club, Tom Baker is one of their Favorite of Whos. As the most flambuoyant of Whos. Tom Baker wore a twenty-foot long scarf; this spawned the production of two twenty-one feet long scarves by Russell's grandmother.

Russell reflects upon the origin of Doctor Who's long scarf. "They wanted Tom Baker to wear a normal scarf at first, but they gave too much yarn to they knitting lady, and she ended up using all of it. It was an accident, but they used the long scarf since it was so eccentric."

The members of the group may be stuck in JC, but in the same buoyant spirit of Doctor Who, they are reaching for the stars.