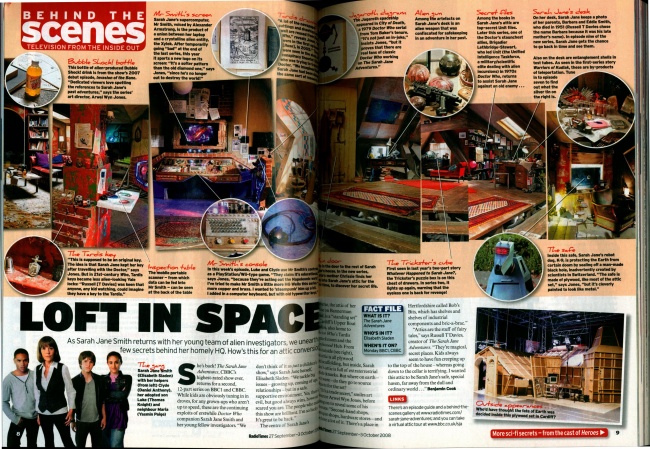 As Sarah Jane Smith returns with her young team of alien investigators, we unearth a few secrets behind her homely HQ. How's this for an attic conversion

She's back! The Sarah Jane Adventures, CBBC's highest-rated show ever, returns for a second, 12-part series on BBC1 and CBBC. While kids are obviously tuning in in droves, for any grown-ups who aren't up to speed, these are the continuing exploits of erstwhile Doctor Who companion Sarah Jane Smith and her young fellow investigators. "We don't think of it as just a children's show," says Sarah Jane herself, Elisabeth Sladen. We tackle big issues-- growing up, coming of age, relationships — but in a safe, supportive environment. Yes there's evil, but good always wins, however scared you are. The people who make this show are brilliant. I'm so lucky. It's great to be back.

The centre of Sarah's universe, the attic of her house on Bannerman road, is a "standing set" in Cardiff's Upper Boat Studios, also home to Doctor Who's Tardis control room and the Torchwood Hub. From the outside (see right), the attic is all plywood and scaffolding but inside, Sarah Jane's attic is full of extraterrestrial nick-knacks. But where on earth--as it were--do they go to source objects for the set?

"It's a trade secret," smiles art director Arwel Wyn Jones, before going on to reveal some of his sources: "Second-hand shops, antique shops, hardware stores-—and we hire a lot of it. There's a place in Hertfordshire called Bob's Bits, which has shelves and shelves of industrial components and bric-a-brac."

"Attics are the stuff of fairy tales," says Russell T Davies, creator of The Sarah Jane Adventures. "They're magical, secret places. Kids always seem to have fun creeping up to the top of the house — whereas going down to the cellar is terrifying. I wanted this attic to be Sarah Jane's safe, special haven, far away from the dull and ordinary world ..."

This bottle of alien-produced Bubble Shock! drink is from the show's 2007 debut episode, Invasion of the Bane. "Dedicated viewers love spotting the references to Sarah Jane's past adventures," says the series' art director, Arwel Wyn Jones.

Sarah Jane's supercomputer, Mr Smith, voiced by Alexander Armstrong, is the product of a union between her laptop and a crystalline alien entity, the Xylok. After temporarily going "bad" at the end of the last series, this year it sports a new logo on its screen: "It's a softer pattern than the old diamond one," says Jones, "since he's no longer out to destroy the world!"

"A lot of the newspaper cuttings and drawings on the wall are reused from "Doctor Who," reveals Jones. "Many were in the first episode [Rose], in 2005, "They were seen in the shed of conspiracy theorist Clive who was trying to trace the Doctor. "We imagined that Sarah Jane had been doing the same sort of research."

"This is supposed to be an original key. The idea is that Sarah Jane kept her key after travelling with the Doctor," says Jones. But in 21st-century Who, Tardis keys became less alien-looking Yale locks: "Russell [T Davies] was keen that anyone, any kid watching, could imagine they have a key to the Tardis."

In this week's episode, Luke and Clyde use Mr Smith's controls as a PlayStation/Wii-type game. "They claim it's educational," says Jones, "because they're acting out the Napoleonic wars!. I've tried to make Mr Smith a little more HG Wells this series -- more copper and brass. I wanted to 'steampunk' him up a bit. I added in a computer keyboard, but with typewriter keys.

The Jagaroth spaceship appeared in City of Death, a 1979 Doctor Who serial from Tom Baker's tenure. "It's not just an in-joke," insists Jones, "but it proves that there are real fans of classic Doctor Who working on The Sarah Jane Adventures."

Among the artefacts on Sarah Jane's desk is an alien weapon that was confiscated for safekeeping in an adventure in her past.

Among the books in Sarah Jane's attic are top-secret Unit files. Later this series, one of the Doctor's staunchest allies, Brigadier Lethbridge-Stewart, who led Unit (the Unified Intelligence Taskforce, a military/scientific elite dealing with alien incursions) in 1970s Doctor Who, returns to assist Sarah Jane against an old enemy...

On her desk, Sarah Jane keeps a photo of her parents, Barbara and Eddie Smith, who died in 1951 (Russell T Davies chose the name Barbara because it was his late mother's name). In episode nine of the new series, Sarah Jane gets the chance to go back in time and see them.

Also on the desk are entanglement shells in test tubes. As seen in the first-series story Warriors of Kudlak, these are by-products of teleportation. Tune in to episode seven to find out what the silver tin on the right is.

This is the door to the rest of Sarah Jane's house. In the new series, Maria's mother Chrissie finds her way into Sarah Jane's attic for the first time, to discover her secret life.

First seen in last year's two-part story Whatever Happened to Sarah Jane?, the Trickster's puzzle box is on this chest of drawers. In series two, it lights up again, warning that the eyeless one is back for revenge!

Inside this safe, Sarah Jane's robot dog, K-9, is protecting the Earth from certain doom by sealing off a man-made black hole, inadvertently created by scientists in Switzerland. "The safe is made of plywood, like most of the attic set," says Jones, "but it's cleverly painted to look like metal."

Outside appearances ... Who'd have thought the fate of Earth was decided inside this plywood set in Cardiff? There's an episode guide and a behind-thescenes gallery at www.radiotimes.com/sarah-jane-adventures; and you can take a virtual attic tour at www.bbc.co.uk/sja