Look! It's the amazing sonic toothbrush 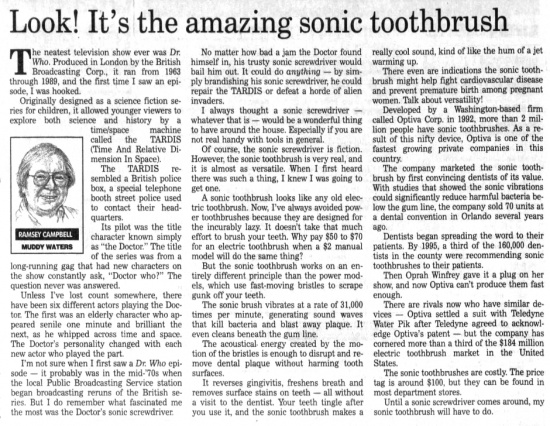 The neatest television show ever was Dr. Who. Produced in London by the British Broadcasting Corp., it ran from 1963 through 1989, and the first time I saw an episode, I was hooked.

Originally designed as a science fiction series for children, it allowed younger viewers to explore both science and history by a time/space machine called the TARDIS (Time And Relative Dimension In Space).

Its pilot was the title character known simply as "the Doctor." The title of the series was from a long-running gag that had new characters on the show constantly ask, "Doctor who?" The question never was answered.

Unless I've lost count somewhere, there have been six different actors playing the Doctor. The first was an elderly character who appeared senile one minute and brilliant the next, as he whipped across time and space. The Doctor's personality changed with each new actor who played the part.

I'm not sure when I first saw a Dr. Who episode — it probably was in the mid-'70s when the local Public Broadcasting Service station began broadcasting reruns of the British series. But I do remember what fascinated me the most was the Doctor's sonic screwdriver.

No matter how bad a jam the Doctor found himself in, his trusty sonic screwdriver would bail him out. It could do anything — by simply brandishing his sonic screwdriver, he could repair the TARDIS or defeat a horde of alien invaders.

I always thought a sonic screwdriver —whatever that is — would be a wonderful thing to have around the house. Especially if you are not real handy with tools in general.

Of course, the sonic screwdriver is fiction. However, the sonic toothbrush is very real, and it is almost as versatile. When I first heard there was such a thing, I knew I was going to get one.

But the sonic toothbrush works on an entirely different principle than the power models, which use fast-moving bristles to scrape gunk off your teeth.

The sonic brush vibrates at a rate of 31,000 times per minute, generating sound waves that kill bacteria and blast away plaque. It even cleans beneath the gum line.

The acoustical energy created by the motion of the bristles is enough to disrupt and remove dental plaque without harming tooth surfaces.

It reverses gingivitis, freshens breath and removes surface stains on teeth — all without a visit to the dentist. Your teeth tingle after you use it, and the sonic toothbrush makes a really cool sound, kind of like the hum of a jet warming up.

There even are indications the sonic toothbrush might help fight cardiovascular disease and prevent premature birth among pregnant women. Talk about versatility!

Developed by a Washington-based firm called Optiva Corp. in 1992, more than 2 million people have sonic toothbrushes. As a result of this nifty device, Optiva is one of the fastest growing private companies in this country.

The company marketed the sonic toothbrush by first convincing dentists of its value. With studies that showed the sonic vibrations could significantly reduce harmful bacteria below the gum line, the company sold 70 units at a dental convention in Orlando several years ago.

Then Oprah Winfrey gave it a plug on her show, and now Optiva can't produce them fast enough.

There are rivals now who have similar devices — Optiva settled a suit with Teledyne Water Pik after Teledyne agreed to acknowledge Optiva's patent — but the company has cornered more than a third of the $184 million electric toothbrush market in the United States.

The sonic toothbrushes are costly. The price tag is around $100, but they can be found in most department stores.

Until a sonic screwdriver comes around, my sonic toothbrush will have to do.