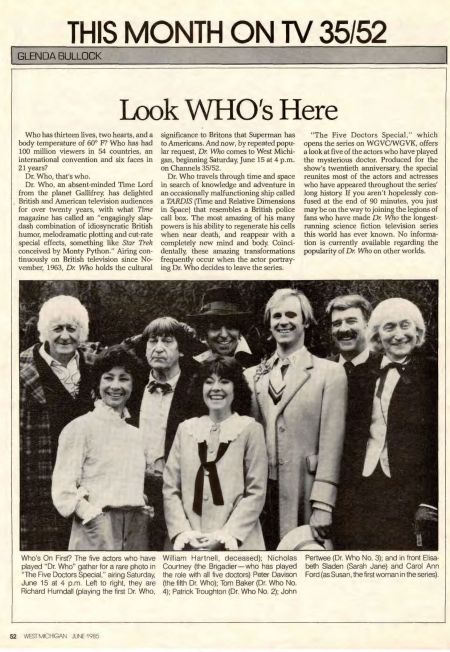 Who has thirteen lives, two hearts, and a body temperature of 60° F? Who has had 100 million viewers in 54 countries, an international convention and six faces in 21 years?

Dr. Who, an absent-minded Time Lord from the planet Gallifrey, has delighted British and American television audiences for over twenty years, with what Time magazine has called an "engagingly slapdash combination of idiosyncratic British humor, melodramatic plotting and cut-rate special effects, something like Star Trek conceived by Monty Python." Airing continuously on British television since November, 1963, Dr Who holds the cultural significance to Britons that Superman has to Americans. And now, by repeated popular request, Dr. Who comes to West Michigan, beginning Saturday, June 15 at 4 p.m. on Channels 35/52.

Dr. Who travels through time and space in search of knowledge and adventure in an occasionally malfunctioning ship called a TARDIS (Time and Relative Dimensions in Space) that resembles a British police call box. The most amazing of his many powers is his ability to regenerate his cells when near death, and reappear with a completely new mind and body. Coincidentally, these amazing transformations frequently occur when the actor portraying Dr. Who decides to leave the series.

"The Five Doctors Special," which opens the series on WGVC/WGVK, offers a look at five of the actors who have played the mysterious doctor. Produced for the show's twentieth anniversary, the special reunites most of the actors and actresses who have appeared throughout the series' long history. If you aren't hopelessly confused at the end of 90 minutes, you just may be on the way to joining the legions of fans who have made DI: Who the longest-running science fiction television series this world has ever known. No information is currently available regarding the popularity of Dr. Who on other worlds.

Caption: Who's On First? The five actors who have played "Dr. Who" gather for a rare photo in "The Five Doctors Special," airing Saturday, June 15 at 4 p.m. Left to right, they are Richard Hurndall (playing the first Dr. Who, William Hartnell, deceased); Nicholas Courtney (the Brigadier—who has played the role with all five doctors) Peter Davison (the fifth Dr. Who); Tom Baker (Dr. Who No. 4); Patrick Troughton (Dr. Who No. 2); John Pertwee (Dr. Who No. 3); and in front Elisabeth Sladen (Sarah Jane) and Carol Ann Ford (as Susan, the first woman in the series).