Look Who's back (Daily Echo) 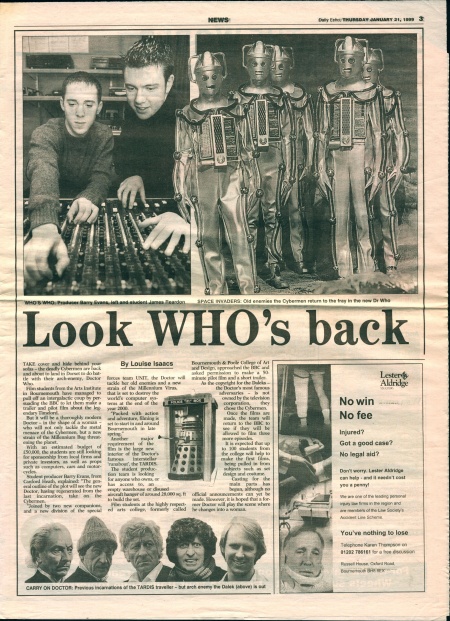 TAKE cover and hide behind your sofas - the deadly Cybermen are back and about to land in Dorset to do battle with their arch-enemy, Doctor Who.

Film students from the Arts Institute in Bournemouth have managed to pull off an intergalactic coup by persuading the BBC to let them make a trailer and pilot film about the legendary Timelord.

But it will be a thoroughly modern Doctor - in the shape of a woman who will not only tackle the metal menace of the Cybermen, but a new strain of the Millennium Bug threatening the planet.

With an estimated budget of £50,000, the students are still looking for sponsorship from local firms and private investors, as well as props such as computers, cars and motorcycles.

Student producer Barry Evans, from Canford Heath, explained: "The general outline of the plot will see the new Doctor, having regenerated from the last incarnation, take on the Cybermen.

"Joined by two new companions, and a new division of the special forces team UNIT, the Doctor will tackle her old enemies and a new strain of the Millennium Virus, that is set to destroy the world's computer systems at the end of the year 2000.

"Packed with action and adventure, filming is set to start in and around Bournemouth in late spring."

Another major requirement of the film is the large new interior of the Doctor's famous interstellar 'runabout', the TARDIS. The student production team is looking for anyone who owns, or has access to, an empty warehouse or disused aircraft hanger of around 28,000 sq. ft to build the set.

Bournemouth & Poole College of Art and Design, approached the BBC and asked permission to make a 50-minute pilot film and a short trailer. As the copyright for the Daleks the Doctor's most famous adversaries - is not owned by the television corporation, they chose the Cybermen. Once the films are made, the team will return to the BBC to see if they will be allowed to film three more episodes.

It is expected that up to 100 students from the college will help to make the first films, being pulled in from subjects such as set design and costume. Casting for the main parts has begun, although no official announcements can yet be made. However, it is hoped that a former Doctor will play the scene where he changes into a woman.

WHO'S WHO: Producer Barry Evans, left and student James Reardon

SPACE INVADERS: Old enemies the Cybermen return to the fray in the new Dr Who

CARRY ON DOCTOR: Previous incarnations of the TARDIS traveller - but arch enemy the Dalek (above) is out