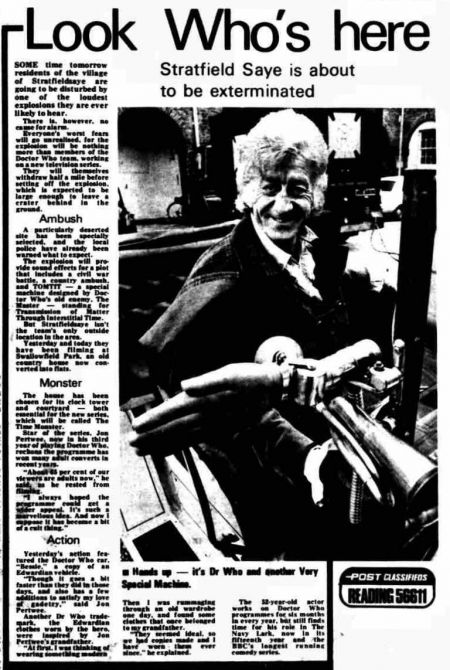 Stratfield Saye is about to be exterminated

SOME time tomorrow residents of the village of Stratfieldsaye are going to be disturbed by one of the loudest explosions they are ever likely to hear.

There is however, no cause for alarm.

Everyone's worst fears will to unrealised, for the explosion will be nothing more than members of the Doctor Who team working on new television series.

They will themselves withdraw hall a mile before setting off the explosion which is expected to be large enough to leave a crater in the ground.

A particularly deserted site has been specially selected. And the local police have already been warned what to expect.

The explosion will provide sound effects for a plot that includes a civil war battle, country ambush, and TOMTIT - a special machine designed by Doctor Who's old enemy, The Master - standing for Transmission of Matter Through Interstitial Time.

But Stratfieldsaye isn't the team's only outside location in the area.

Yesterday and today they have been filming at Swallowfield Park, an old country house now converted into flats.

The house has been chosen for its clock tower and courtyard - both essential for the new series, which will be called The Time Monster.

Star of the series, Jon Pertwee, now to his third year of playing Doctor Who, reckons the programme has won many adult converts in recent years.

"About 65 per cent of our viewers are adults now," he said, as rested from filming.

"I always hoped the programme could get an older appeal. It's such marvellous Idea. And now I suppose it has become a bit of a cult thing."

Yesterday's action featured the Doctor Who car, "Bessie," a copy of an Edwardian vehicle.

Though it goes a bit faster than they did in those days, and also has few additions to satisfy my love of gadetry," said Jon Pertwee.

Another Dr Who trademark, the Edwardian clothes worn by the hero, were inspired by Jon Pertwee's grandfather.

"At first, I thinking of wearing something modern. Then I was rummaging through an old wardrobe one day, and found some clothes that once belonged to my grandfather.

"They seemed ideal, so we had copies made and I have worn them ever since." he explained.

The 52-year-old actor works on Doctor Who programmes for six months In every year, but still finds time for his role in The Navy Lark, now in its fifteenth year and the BBC's longest running comedy series.

Caption: Hands up - it's Dr Who and another Very Special Machine