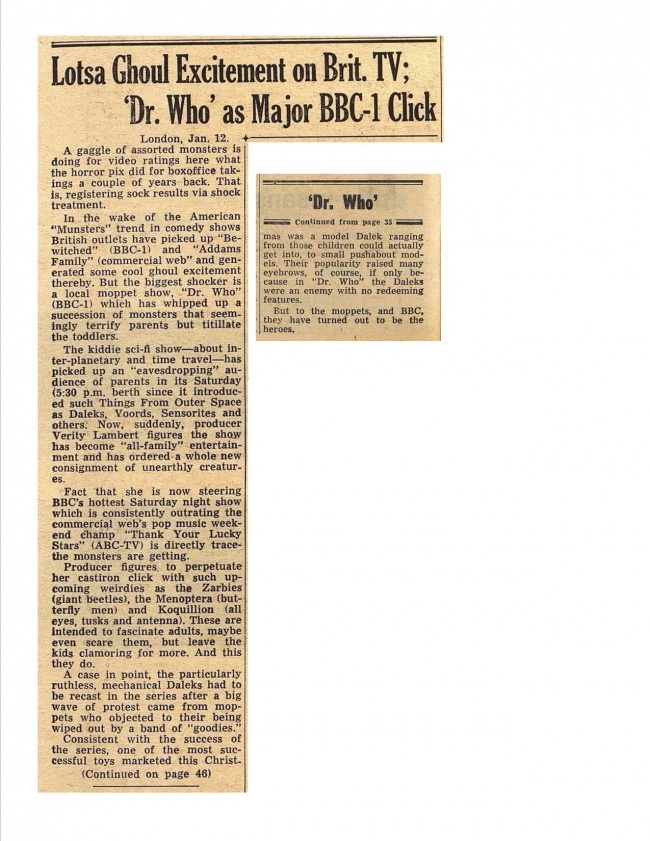 A gaggle of assorted monsters is doing for video ratings here what the horror pix did for boxoffice takings a couple of years back. That is, registering sock results via shock treatment.

In the wake of the American "Munsters" trend in comedy shows British outlets have picked up "Bewitched" (BBC-1) and "Addams Family" (commercial web" and generated some cool ghoul excitement thereby. But the biggest shocker is a local moppet show, "Dr. Who" (BBC-1) which has whipped up a succession of monsters that seemingly terrify parents but titillate the toddlers.

The kiddie sci-fi show—about inter-planetary and time travel—has picked up an "eavesdropping" audience of parents in its Saturday (5:30 p.m. berth since it introduced such Things From Outer Space as Daleks, Voords, Sensorites and others: Now, suddenly, producer Verity Lambert figures the show has become "all-family" entertainment and has ordered a whole new consignment of unearthly creatures.

Fact that she is now steering BBC's hottest Saturday night show which is consistently outrating the commercial web's pop music weekend champ "Thank Your Lucky Stars" (ABC-TV) is directly trace-the monsters are getting.

Producer figures to perpetuate her castiron click with such upcoming weirdies as the Zarbies (giant beetles), the Menoptera (butterfly men) and Koquillion (all eyes, tusks and antenna). These are intended to fascinate adults, maybe even scare them, but leave the kids clamoring for more. And this they do.

A case in point, the particularly ruthless, mechanical Daleks had to be recast in the series after a big wave of protest came from moppets who objected to their being wiped out by a band of "goodies."

Consistent with the success of the series, one of the most successful toys marketed this Christmas was a model Dalek ranging from those children could actually get into, to small pushabout models. Their popularity raised many eyebrows, of course, if only because in "Dr. Who" the Daleks were an enemy with no redeeming features.

But to the moppets, and BBC, they have turned out to be the heroes.