Magic tricks beyond the imagination of a sorcerer 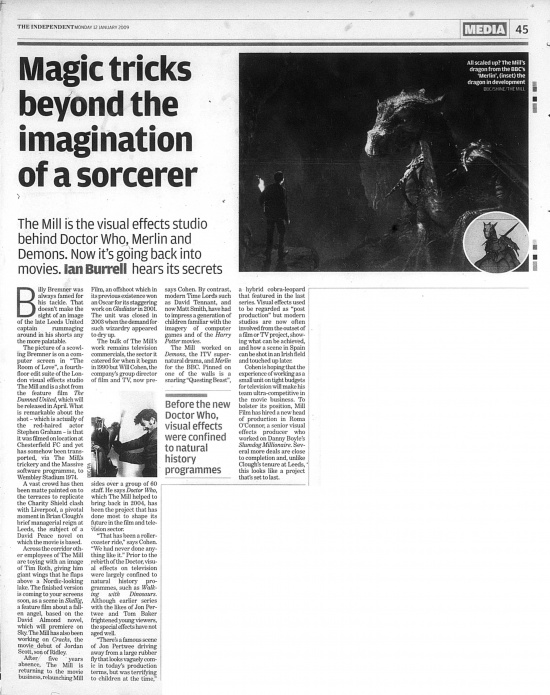 Billy Bremner was always famed for his tackle. That doesn't make the sight of an image of the late Leeds United captain rummaging around in his shorts any the more palatable.

The picture of a scowling Bremner is on a computer screen in "The Room of Love", a fourth-floor edit suite of the London visual effects studio The Mill and is a shot from the feature film The Damned United, which will be released in April. What is remarkable about the shot - which is actually of the red-haired actor Stephen Graham - is that it was filmed on location at Chesterfield FC and yet has somehow been transported, via The Mill's trickery and the Massive software programme, to Wembley Stadium 1974.

A vast crowd has then been matte painted on to the terraces to replicate the Charity Shield clash with Liverpool, a pivotal moment in Brian Clough's brief managerial reign at Leeds, the subject of a David Peace novel on which the movie is based.

Across the corridor other employees of The Mill are toying with an image of Tim Roth, giving him giant wings that he flaps above a Nordic-looking lake. The finished version is coming to your screens soon, as a scene in Skellig, a feature film about a fallen angel, based on the David Almond novel, which will premiere on Sky. The Mill has also been working on Cracks, the movie debut of Jordan Scott, son of Ridley.

After five years absence, The Mill is returning to the movie business, relaunching Mill Film, an offshoot which in its previous existence won an Oscar for its staggering work on Gladiator in 2001. The unit was closed in 2003 when the demand for such wizardry appeared to dry up.

The bulk of The Mill's work remains television commercials, the sector it catered for when it began in 1990 but Will Cohen, the company's group director of film and TV, now presides over a group of 60 staff. He says Doctor Who, which The Mill helped to bring back in 2004, has been the project that has done most to shape its future in the film and television sector.

"That has been a rollercoaster ride," says Cohen. "We had never done anything like it." Prior to the rebirth of the Doctor, visual effects on television were largely confined to natural history programmes, such as Walking with Dinosaurs. Although earlier series with the likes of Jon Pertwee and Tom Baker frightened young viewers, the special effects have not aged well.

"There's a famous scene of Jon Pertwee driving away from a large rubber fly that looks vaguely comic in today's production terms, but was terrifying to children at the time," says Cohen. By contrast, modern Time Lords such as David Tennant, and now Matt Smith, have had to impress a generation of children familiar with the imagery of computer games and of the Harry Potter movies.

The Mill worked on Demons, the ITV supernatural drama, and Merlin for the BBC. Pinned on one of the walls is a snarling "Questing Beast", a hybrid cobra-leopard that featured in the last series. Visual effects used to be regarded as "post production" but modern studios are now often involved from the outset of a film or TV project, showing what can be achieved, and how a scene in Spain can be shot in an Irish field and touched up later.

Cohen is hoping that the experience of working as a small unit on tight budgets for television will make his team ultra-competitive in the movie business. To bolster its position, Mill Film has hired a new head of production in Roma O'Connor, a senior visual effects producer who worked on Danny Boyle's Slumdog Millionaire. Several more deals are close to completion and, unlike Clough's tenure at Leeds, this looks like a project that's set to last.