Mark is so two faced 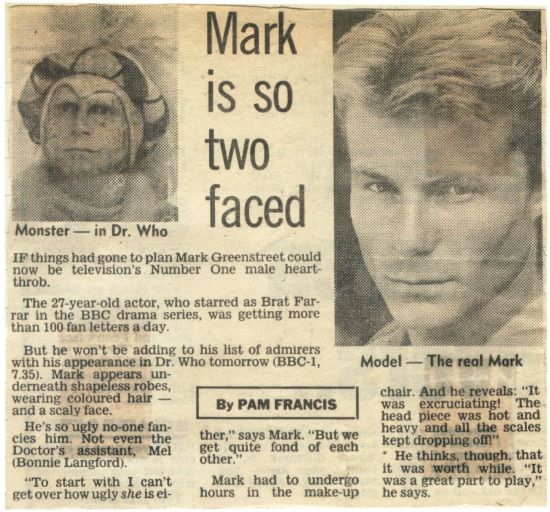 IF things had gone to plan Mark Greenstreet could now be television's Number One male heartthrob.

The 27-year-old actor, who starred as Brat Farrar in the BBC drama series, was getting more than 100 fan letters a day.

But he won't be adding to his list of admirers with his appearance in Dr. Who tomorrow (BBC-1, 7.35). Mark appears underneath shapeless robes, wearing coloured hair — and a scaly face.

He's so ugly no-one fancies him. Not even the Doctor's assistant, Mel (Bonnie Langford).

"To start with I can't get over how ugly she is either," says Mark. "But we get quite fond of each other."

Mark had to undergo hours in the make-up chair. And he reveals: "It was excruciating! The head piece was hot and heavy and all the scales kept dropping off!"

He thinks, though, that it was worth while. "It was a great part to play," he says.

Caption: Monster — in Dr. Who