Marriage shock of Dr Who girl 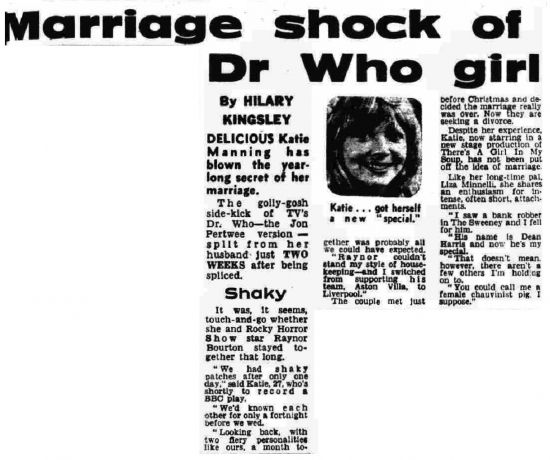 DELICIOUS Katie Manning has blown the yearlong secret of her marriage.

The golly-gosh side-kick of TV's Dr. Who — the Jon Pertwee version - spilt from her husband just TWO WEEKS after being spliced.

It was, it seems, touch-and-go whether she and Rocky Horror star Raynor Bourton stayed together that long.

"We had shaky patches after only one day," said Katie, 27, who's shortly to record BBC play.

"We'd known each other for only a fortnight before we wed.

"Looking back, with two fiery personalities like ours, a month together was probably all we could have expected.

"Raynor couldn't stand my style of housekeeping — and I switched from supporting his team, Aston Villa, to Liverpool."

The couple met just before Christmas and decided the marriage really was over. Now they are seeking a divorce.

Despite her experience, Katie, now starring in a new stage production of There's A In My Soup, has not been put off the idea of marriage.

Like her long-time pal. Liza Minnelli, she shares an enthusiasm for intense, often short, attachments.

"I saw a bank robber in The Sweeney and I fell for him.

"His name is Dean Harris and now he's my special.

"That doesn't mean, however, there aren't a few others I'm holding on to.

"You could call me female chauvinist pig, I suppose."

Caption: Katie ... got herself a new "special."