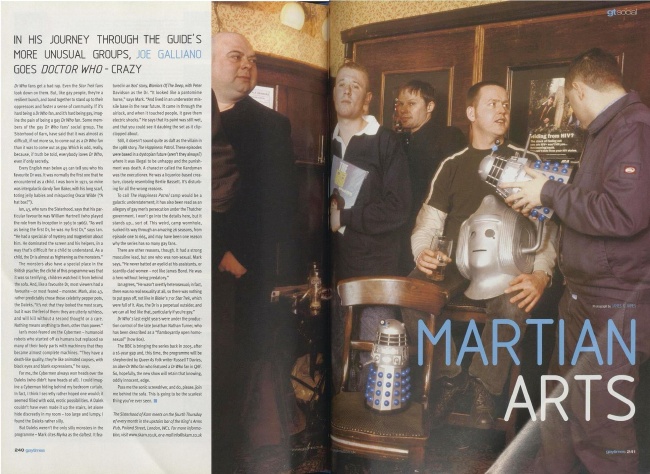 Dr Who fans get a bad rap. Even the Star Trek fans look down on them. But, like gay people, they're a resilient bunch, and band together to stand up to their oppressors and foster a sense of community. If it's hard being a Dr Who fan, and it's hard being gay, imagine the pain of being a gay Dr Who fan. Some members of the gay Dr Who fans' social group, The Sisterhood of Karn, have said that it was almost as difficult, if not more so, to come out as a Dr Who fan than it was to come out as gay. Which is odd, really, because, if truth be told, everybody loves Dr Who, even if only secretly.

Every English man below 45 can tell you who his favourite Or was. It was normally the first one that he encountered as a child. I was born in 1971, so mine was intergalactic dandy Tom Baker, with his long scarf, toting jelly babies and misquoting Oscar Wilde ("A hat box?").

Ian, 43, who runs the Sisterhood, says that his particular favourite was William Hartnett (who played the role from its inception in 1963 to 1966). "As well as being the first Dr, he was my first Dr," says Ian. "He had a special air of mystery and magnetism about him. He dominated the screen and his helpers, in a way that's difficult for a child to understand. As a child, the Dr is almost as frightening as the monsters."

The monsters also have a special place in the British psyche; the cliché of this programme was that it was so terrifying, children watched it from behind the sofa. And, like a favourite Dr, most viewers had a favourite-or most feared - monster. Mark, also 43, rather predictably chose those celebrity pepper pots, the Dateks. "It's not that they looked the most scary. but it was the feel of them: they are utterly ruthless, and will kill without a second thought or a care. Nothing means anything to them, other than power."

Ian's most-feared are the Cybermen - humanoid robots who started off as humans but replaced so many of their body parts with machinery that they became almost complete machines. "They have a death-like quality; they're like animated corpses, with black eyes and blank expressions," he says.

But Daleks weren't the only silly monsters in the programme-Mark cites Myrka as the daftest. It featured in an 80s' story, Warriors Of The Deep, with Peter Davidson as the Dr. "It looked like a pantomime horse," says Mark. "And lived in an underwater missile base in the near future. It came in through the airlock, and when it touched people, it gave them electric shocks." He says that its paint was still wet, and that you could see it daubing the set as it clip-clopped about.

Still, it doesn't sound quite as daft as the villain in the 1988 story, The Happiness Patrol. These episodes were based in a dystopian future (aren't they always?) where it was illegal to be unhappy and the punish. ment was death. A character called the Kandyman was the executioner. He was a liquorice-based creature, closely resembling Bertie Bassett. It's disturbing for all the wrong reasons.

To call The Happiness Patrol camp would be a galactic understatement; it has also been read as an allegory of gay men's persecution under the Thatcher government. I won't go into the details here, but it stands up... sort of. This weird, camp wormhole, sucked its way through an amazing 26 seasons, from episode one to 665, and may have been one reason why the series has so many gay fans.

There are other reasons, though. It had a strong masculine lead, but one who was non-sexual. Mark says, "He never batted an eyelid at his assistants, or scantily-clad women - not like James Bond. He was a hero without being predatory."

Ian agrees, "He wasn't overtly heterosexual; in fact, there was no real sexuality at all, so there was nothing to put gays off, not like in Bloke's7 or Star Trek, which were full of it. Also, the Dr is a perpetual outsider, and we can all feel like that, particularly if you're gay."

Dr Who's last eight years were under the production control of the late Jonathan Nathan Turner, who has been described as a "flamboyantly open homosexual" (how 80s).

The BBC is bringing the series back in 2005, after a 16-year gap and, this time, the programme will be shepherded by Queer As Folk writer Russell T Davies, an über-Dr Who fan who featured a Dr Who fan in QAF. So, hopefully, the new show will retain that knowing, oddly innocent, edge.

Pass me the sonic screwdriver, and do, please, join me behind the sofa. This is going to be the scariest thing you've ever seen.

The Sisterhood of Karn meets on the fourth Thursday of every month in the upstairs bar of the King's Arms Pub, Poland Street, London, WC1. For more information, visit www.skarn.co.uk, or e-mail info@skarn.co.uk