Master of the Daleks 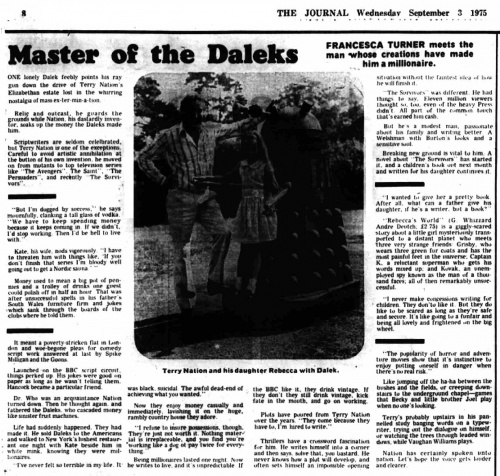 FRANCESCA TURNER meets the man whose creations have made him a millionaire.

ONE lonely Dalek feebly points his ray gun down the drive of Terry Nation Elizabethan estate lost in the whirring nostalgia of mass ex-ter-min-a-tion.

Relic and outcast, he guards the grounds while Nation, his dastardly inventor, soaks up the money the Daleks made him.

Scriptwriters are seldom celelbrated, but Terry Nation is one of the exceptions. Careful to avoid artistic annihilation at the button of his own invention, he moved on from mutants to top television series like "The Avengers", "The Saint", "The Persuaders", and recently "The Survivors."

"But I'm dogged by success," he says mournfully, clanking a tall glass of vodka. "We have to keep spending money herniate it keeps coming in. If we didn't, I'd stop working. Then I'd be hell to live with."

Kate, his wife, nods vigorously. "I have to threaten him with things like, 'If you don't finish that series I'm bloody well going out to get a Nordic sauna.'"

Money used to mean a big pot of pennies and a trolley of drinks one guest would polish off in half an hour. That was after unsuccessful spells in his father's South Wales furniture firm and jokes which sank through the boards of the clubs where he told them.

It meant a poverty stricken flat in London and woe-begone pleas for comedy script work answered at last by Spike Milligan and the Goons.

Launched on the BBC script circuit, things perked up. His jokes were good on paper as long as he wasn't telling them. Hancock became a particular friend.

Dr. Who was an acquaintance Nation turned down. Then he thought again and fathered the Daleks, who cascaded money like sinister fruit machines.

Life had suddenly happened. They had made it. He sold Daleks to the Americans and walked to New York's lushest restaurant one night with Kate beside him in white mink, knowing they were millionaires.

"I've never felt so terrible in my life. It was black, suicidal The awful dead-end of achieving what you wanted."

Now they enjoy money casually and immediately, lavishing it on the huge, rambly country house they adore.

"I refuse to insure possessions, though. They're just not worth it Nothing material is irreplaceable, and you find you're *working like a dog to pay twice for everything."

Being millionaires lasted one night. Now he writes to live, and it's unpredictable. If the BBC like it, they drink vintage. If they don't they still drink vintage, kick fate in the mouth, and go on working.

Plots have poured from Terry Nation over the years. "They come because they I have to. I'm hired to write "

Thrillers have a crossword fascination for him. He writes himself into a corner and then says solve that, you bastard. He never knows how a plot will develop, and often sets himself an impossible situation without the faintest idea of how hie will finish it.

"The Survivors" was different. He had things to say. Eleven million viewers thought so, too, even of the heavy Press didn't. All part of the common t.nicl that's earned him cash.

But he's a modest man, passionate about his family and writing better. A Welshman with Burton's looks and sensitive soul.

Breaking new ground is vital to him. A novel about "The Survivors" has started it, and a children's book out next month and written for his daughter continues it.

"I wanted to give her a pretty hook. After all, what can a father give his daughter, if he's a writer, but a book?"

"Rebecca's World" (G Whizzard Andre Deutch, £2 75) is a giggly-scared story about a little girl mysteriously transported to a distant planet who meets three very strange friends. Grisby, who wears three green fur coats and has the most painful feet in the universe. Caplan K. a reluctant superman who gets his words mixed up, and Kovak, an unemployed spy known as the man of a thousand faces, all of then remarkably unsuccessful.

"I never make concessions writing for children. They don't like it. But they do like to be scared as long as they're safe and secure. It's like going to a funfair and being all lovely and frightened on the big wheel.

"The popularity of horror and adventure movies show that it's instinctive to enjoy the putting oneself in danger when there's no real risk."

Like jumping off the ha-ha between the bushes and the fields, or creeping downstairs to the underground chapel—game that Becky and little brother Joel play when no one's looking.

Terry's probably upstairs in his pannelled study banging words on a typewriter, trying out the dialogue on himself or watching the tree through leaded windows, while Vaughan Williams plays.

Nation has certainly spoken unto nation. Let's hope the voice gets louder and clearer.

Caption: Terry Nation and his daughter Rebecca with Dalek.