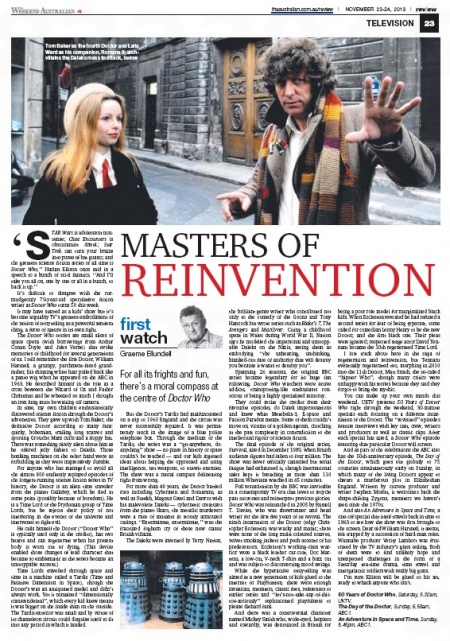 "STAR Wars is adolescent nonsense; Close Encounters is obscurantist drivel; Star Trek can turn your brains into puree of bat guano; and the greatest science fiction series of all time is Doctor Who," Harlan Ellison once said in a speech to a bunch of sci-fi fanatics. " And I'll take you all on, one by one or all in a bunch, to back it up."

It's difficult to disagree with the curmudgeonly 79-year-old speculative fiction writer as Doctor Who turns 50 this week.

It may have started as a kids' show but it's become arguably TV's greatest embodiment of the notion of storytelling as a powerful sentient thing, a force of nature in its own right.

The Doctor Who stories are small slices of space opera (with borrowings from Arthur Conan Doyle and Jules Verne) that evoke memories of childhood for several generations of us. I still remember the first Doctor, William Hartnell, a grumpy, parchment-faced grandfather, his thinning white hair pulled back like a panto wig when he appeared on the ABC in 1963. He described himself in the role as a cross between the Wizard of Oz and Father Christmas and he wheezed so much I thought an iron lung must be waiting off camera.

In time, my own children enthusiastically discovered science fiction through the Doctor's adventures. They grew up with Tom Baker, the definitive Doctor according to many fans: quirky, bohemian, trailing long scarves and sporting Groucho Marx curls and a floppy hat. There was something nicely alien about him as he offered jelly babies to Daleks. Those honking machines on the other hand were as forbidding as they were impressively durable.

For anyone who has managed to avoid all the almost 800 endlessly replayed episodes of the longest-running science fiction series in TV history, the Doctor is an alien time traveller from the planet Gallifrey, which he fled at some point (possibly because of boredom). He is a Time Lord of the Prydonian group of Time Lords, but he rejects their policy of not interfering in the events of the universe and intervenes to fight evil.

He calls himself the Doctor ("Doctor Who" is typically used only in the credits), has two hearts and can regenerate when his present body is worn out or dying. (This device enabled those changes of lead character that became so emblematic as the series became an unstoppable success.)

Time Lords travelled through space and time in a machine called a Tardis (Time and Relative Dimension in Space), though the Doctor's was an antiquated model and didn't always work. Yet it remained " dimensionally transcendental", which every kid knew meant it was bigger on the inside than on the outside. The Tardis exterior was small and by virtue of its chameleon circuit could disguise itself to fit into any period in which it landed.

But the Doctor's Tardis had malfunctioned on a trip to 1963 England and the circuit was never successfully repaired. It was permanently stuck in the image of a blue police telephone box. Through the medium of the Tardis, the series was a " go-anywhere, doanything" show — no place in history or space couldn't be reached — and our kids ingested ideas about helping the oppressed and using intelligence, not weapons, to outwit enemies. The show was a moral compass delineating right from wrong.

For more than 40 years, the Doctor battled foes including Cybermen and Sontarans, as well as Sutekh, Magnus Greel and Davros with his malevolent Daleks — cybernetic creatures from the planet Skaro, the metallic murderers were a race of mutants in stoutly armoured casings. " Exterminate, exterminate," was the fractured foghorn cry of these now classic British villains.

The Daleks were invented by Terry Nation, the brilliant genre writer who contributed not only to the comedy of the Goons and Tony Hancock but wrote series such as Blake's 7, The Avengers and MacGyver. Citing a childhood spent in Wales during World War II, Nation says he modelled the impersonal and unstoppable Daleks on the Nazis, seeing them as embodying " the unhearing, unthinking, blanked-out face of authority that will destroy you because it wants to destroy you".

They could recite the credits from their favourite episodes, do Dalek impersonations and knew what Metebelis-3, E-space and Faction Paradox meant. Some of them couldn't move on, victims of a golden ageism, clutching at the past completely in contradiction to the intellectual rigour of science fiction.

The final episode of the original series, Survival, aired in December 1989, when British audience figures had fallen to four million. The show was never officially cancelled but serial fatigue had exhausted it, though international sales kept it breathing as more than 110 million Whovians watched in 65 countries.

Full resuscitation by the BBC was inevitable in a contemporary TV era that loves to recycle past successes and reinterpret previous glories. Doctor Who was relaunched in 2005 by Russell T. Davies, who was showrunner and head writer for the first five years of its revival. The ninth incarnation of the Doctor (edgy Christopher Eccleston) was wacky and manic; there were none of the long multi-coloured scarves, velvet smoking jackets and posh accents of his predecessors. Eccleston's working-class warrior wore a black leather car-coat, Doc Martens, a low-cut, V-neck T-shirt and a buzz cut and was subject to disconcerting mood swings.

While the hyperactive storytelling was aimed at a new generation of kids glued to the internet or PlayStation, there were enough invasions, monsters, classic foes, references to earlier series and " let's-not-take-any-of-thistoo-seriously" sophisticated playfulness to please diehard fans.

And there was a controversial character named Mickey Smith who, wide-eyed, helpless and cowardly, was denounced in Britain for being a poor role model for marginalised black kids. When Eccleston revealed he had refused a second series for fear of being typecast, some called for comedian Lenny Henry to be the new Doctor, and the first black one. Their pleas were ignored; respected stage actor David Tennant became the 10th regenerated Time Lord.

I lost track about here in the saga of regeneration and reinvention, but Tennant eventually regenerated too, morphing in 2010 into the 11th Doctor, Matt Smith, the so-called " hipster Who", though many critics were unhappy with his stories because they said they forgot to bring the mythic.

You can make up your own minds this weekend. UKTV presents 50 Years of Doctor Who right through the weekend, 30-minute specials each focusing on a different incarnation of the Doctor. The " revisited" episodes feature interviews with key cast, crew, writers and producers as well as classic clips. After each special has aired, a Doctor Who episode featuring that particular Doctor will screen.

And as part of the celebrations the ABC also has the 50th-anniversary episode, The Day of the Doctor, which goes out globally to 75 countries simultaneously early on Sunday, in which many of the living Doctors appear to thwart a murderous plot in Elizabethan England. Written by current producer and writer Stephen Moffat, it welcomes back the shape-shifting Zygons, monsters we haven't seen since the 1970s.

And also An Adventure in Space and Time, a one-off special that itself travels back in time to 1963 to see how the show was first brought to the screen. Dear old William Hartnell, it seems, felt trapped by a succession of hard-man roles. Wannabe producer Verity Lambert was frustrated by the TV industry's glass ceiling. Both of them were to find unlikely hope and unexpected challenges in the form of a Saturday tea-time drama, time travel and intergalactic soldiers with really big guns.

I'm sure Ellison will be glued to his ready to whack anyone who isn't.