Matt's back in time 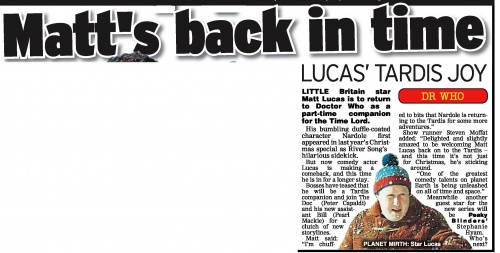 LITTLE Britain star Matt Lucas is to return to Doctor Who as a part-time companion for the Time Lord.

But now comedy actor Lucas is making a comeback, and this time he is in for a longer stay.

Bosses have teased that he will be a Tardis companion and join The Doc (Peter Capaldi) and his new assistaant Bill (Pearl Mackie) for a clutch of new storylines.

Matt said: "I'm chuffed to bits that Nardole is returning to the Tardis for some more adventures."

Show runner Steven Moffat added: "Delighted and slightly amazed to be welcoming Matt Lucas back on to the Tardis —and this time it's not just for Christmas, he's sticking around.

"One of the greatest comedy talents on planet Earth is being unleashed on all of time and space." Meanwhile another guest star for the new series will be Peaky Blinders' Stephanie Hyam. Who's next?