Matt Lucas hops onto the TARDIS as 'Doctor Who' regular 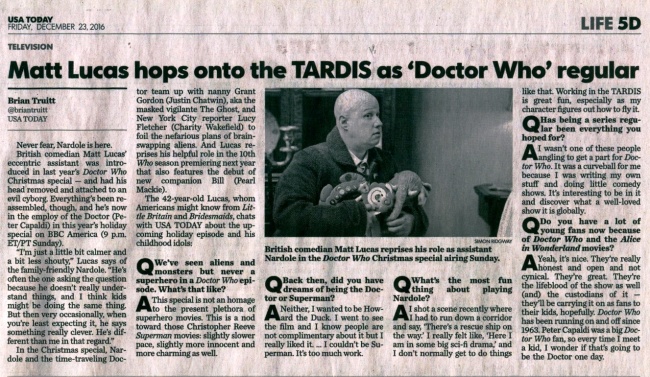 British comedian Matt Lucas' eccentric assistant was introduced in last year's Doctor Who Christmas special — and had his head removed and attached to an evil cyborg. Everything's been reassembled, though, and he's now in the employ of the Doctor (Peter Capaldi) in this year's holiday special on BBC America (9 p.m. ET/PT Sunday).

"I'm just a little bit calmer and a bit less shouty," Lucas says of the family-friendly Nardole. "He's often the one asking the question because he doesn't really understand things, and I think kids might be doing the same thing. But then very occasionally, when you're least expecting it, he says something really clever. He's different than me in that regard."

In the Christmas special, Nar-dole and the time-traveling Doc tor team up with nanny Grant Gordon (Justin Chatwin), aka the masked vigilante The Ghost, and New York City reporter Lucy Fletcher (Charity Wakefield) to foil the nefarious plans of brain-swapping aliens. And Lucas reprises his helpful role in the 10th Who season premiering next year that also features the debut of new companion Bill (Pearl Mackie).

The 42-year-old Lucas, whom Americans might know from Little Britain and Bridesmaids, chats with USA TODAY about the upcoming holiday episode and his childhood idols:

Q We've seen aliens and monsters but never a superhero in a Doctor Who episode. What's that like?

A This special is not an homage Ato the present plethora of superhero movies. This is a nod toward those Christopher Reeve Superman movies: slightly slower pace, slightly more innocent and more charming as well.

Q Back then, did you have dreams of being the Doctor or Superman?

A Neither, I wanted to be Howard the Duck. I went to see the film and I know people are not complimentary about it but I really liked it. ... I couldn't be Superman. It's too much work. oWhat's the most fun thing about playing Nardole?

A I shot a scene recently where AI had to run down a corridor and say, 'There's a rescue ship on the way.' I really felt like, 'Here I am in some big sci-fi drama,' and I don't normally get to do things like that. Working in the TARDIS is great fun, especially as my character figures out how to fly it.

Q Has being a series regular been everything you hoped for?

A I wasn't one of these people angling to get a part for Doctor Who. It was a curveball for me because I was writing my own stuff and doing little comedy shows. It's interesting to be in it and discover what a well-loved show it is globally.

Q Do you have a lot of young fans now because of Doctor Who and the Alice in Wonderland movies?

A Yeah, it's nice. They're really honest and open and not cynical. They're great. They're the lifeblood of the show as well (and) the custodians of it —they'll be carrying it on as fans to their kids, hopefully. Doctor Who has been running on and off since 1963. Peter Capaldi was a big Doctor Who fan, so every time I meet a kid, I wonder if that's going to be the Doctor one day.