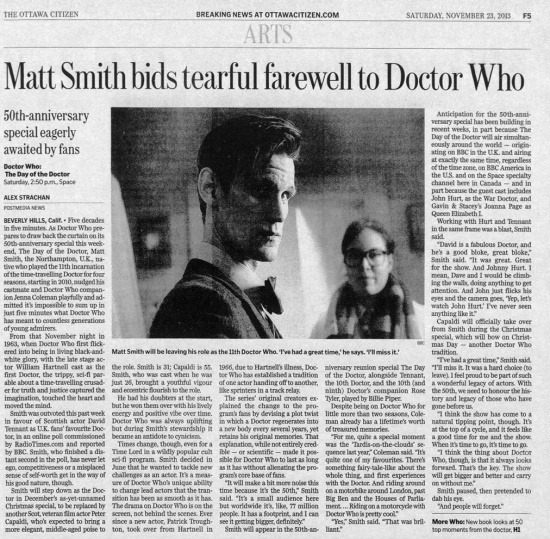 Doctor Who prepares to draw back the curtain on its 50th-anniversary special, The Day of the Doctor, this weekend, and Matt Smith, who played the 11th incarnation of the time-travelling Doctor for four seasons, starting in 2010, has been asked to sum up in just five minutes what Doctor Who has meant to countless generations of young admirers.

He nudged his cast-mate and Doctor Who companion Jenna Coleman playfully and admitted it's impossible.

From that November night in 1963, the night after the JFK assassination, when Doctor Who first flickered into being in living black-and-white glory, with stage actor William Hartnell cast as the first Doctor, the trippy, sci-fi parable about a time-travelling crusader for truth and justice captured the imagination, touched the heart and moved the mind.

Smith was outvoted this past week in favour of Scottish actor David Tennant as U.K. fans' favourite Doctor, in an online poll commissioned by RadioTimes.com and reported by BBC. Smith, who finished a distant second in the poll, has never let ego, competitiveness or a misplaced sense of self-worth get in the way of his good nature, though.

Smith will step down as the Doctor in December's as yet unnamed Christmas special, to be replaced by another Scot, veteran film actor Peter Capaldi, who's expected to bring a more elegant, middle-aged poise to the role. Smith is 31; Capaldi is 55. Smith, who was cast when he was 26, brought a youthful vigour and eccentric flourish to the role.

Times change, though, even for a performer playing a Time Lord in a wildly popular cult sci-fi program. Smith decided in June he wanted new challenges as an actor. It's a measure of Doctor Who's unique ability to change lead actors that the transition has been as smooth as it has. The drama on Doctor Who is on the screen, not behind the scenes. Ever since a new actor, Patrick Troughton, took over from Hartnell in 1966, due to Hartnell's illness, Doctor Who has established a tradition of one actor handing off to another, like sprinters in a track relay.

The series' original creators explained the change to the program's fans by devising a plot twist in which the Doctor regenerates into a new body every several years, yet retains his original memories. That explanation, while not entirely credible, made it possible for Doctor Who to last as long as it has without alienating the program's core base of fans.

Coleman, a 27-year-old who made her name in the U.K. soap opera Emmerdale, will stay with the Doctor through the transition, having joined Who last year as companion to Smith's 11th Doctor.

Coleman joins a Who tradition of companions who outlived their respective Doctors, but that didn't stop her from tearing up at the realization that the end is coming, where Smith is concerned.

"I'm slightly in denial about the fact that Matt is leaving," she said.

Smith will appear in the 50th-anniversary reunion special The Day of Doctor, alongside Tennant, the 10th Doctor, and the 10th (and ninth) Doctor's companion Rose Tyler, played by Billie Piper.

Anticipation for the 50th-anniversary special has been building in recent weeks, in part because The Day of the Doctor will air simultaneously around the world and in part because the guest cast includes John Hurt, as the War Doctor, and Gavin &; Stacey's Joanna Page as Queen Elizabeth I. Working with Hurt and Tennant in the same frame was a blast, Smith said.

"David is a fabulous Doctor, and he's a good bloke, great bloke," Smith said. "It was great. Great for the show. And Johnny Hurt. I mean, Dave and I would be climbing the walls, doing anything to get attention. And John just flicks his eyes and the camera goes, 'Yep, let's watch John Hurt.' I've never seen anything like it."

Capaldi will officially take over from Smith during the as yet untitled Christmas special, which will bow on Christmas Day - another Doctor Who tradition.

"I've had a great time," Smith said. "I'll miss it. It was a hard choice (to leave). I feel proud to be part of such a wonderful legacy of actors.

"I think the thing about Doctor Who, though, is that it always looks forward. That's the key. The show will get bigger and better and carry on without me."

Smith paused, then pretended to dab his eye.

"And people will forget."

Doctor Who: The Day of the Doctor airs Saturday, 2:50 p.m., on the Space channel.

Caption: BBC; John Hurt, second from left, Matt Smith and David Tennant in The Day of The Doctor, the 50th-anniversary special.