Matt Smith has been a lovely Doctor, and this was a tearful goodbye 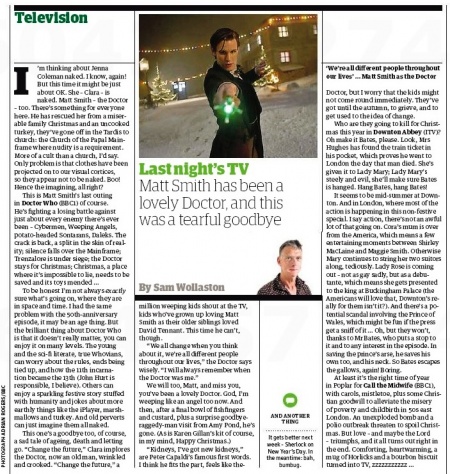 I'm thinking about Jenna Coleman naked. I know, again! But this time it might be just about OK. She - Clara - is naked. Matt Smith - the Doctor - too. There's something for everyone here. He has rescued her from a miserable family Christmas and an uncooked turkey, they've gone off in the Tardis to church: the Church of the Papal Mainframe where nudity is a requirement. More of a cult than a church, I'd say. Only problem is that clothes have been projected on to our visual cortices, so they appear not to be naked. Boo! Hence the imagining, all right?

This is Matt Smith's last outing in Doctor Who (BBC1) of course. He's fighting a losing battle against just about every enemy there's ever been - Cybermen, Weeping Angels, potato-headed Sontasans, Daleks. The crack is back, a split in the skin of reality; silence falls over the Mainframe; Trenzalore is under siege; the Doctor stays for Christmas; Christmas, a place where it's impossible to lie, needs to be saved and its toys mended ...

To be honest I'm not always exactly sure what's going on, where they are in space and time. I had the same problem with the 50th-anniversary episode, it may been age thing. But the brilliant thing about Doctor Who is that it doesn't really matter, you can enjoy it on many levels. The young and the sci-fi literate, true Whovians, can worry about the rules, ends being tied up, and how the 11th incarnation became the 13th (John Hurt is responsible, I believe). Others can enjoy a sparkling festive story stuffed with humanity and jokes about more earthly things like the iPlayer, marshmallows and turkey. And old perverts an just imagine them all naked.

This one's a goodbye too, of course, a sad tale of ageing, death and letting go. "Change the future," Clara implores the Doctor, now an old man, wrinkled and crooked. "Change the future," a million weeping kids shout at the TV, kids who've grown up loving Matt Smith as their older siblings loved David Tennant. This time he can't, though.

"We all change when you think about it, we're all different people throughout our lives," the Doctor says wisely. "I will always remember when the Doctor was me."

"We will too, Matt, and miss you, you've been a lovely Doctor. God, I'm weeping like an angel too now. And then, after a finalb owl of fishfingers and custard, plus a surprise goodbye raggedy-man visit from Amy Pond, he's gone. (As is Karen Gillan's kit of course, in my mind, Happy Christmas.)

"Kidneys, I've got new kidneys," are Peter Capaldi's famous first words. I think he fits the part, feels like the Doctor, but I worry that the kids might not come round immediately. They've got until the autumn, to grieve, and to get used to the idea of change.

Additional keywords: The Time of the Doctor