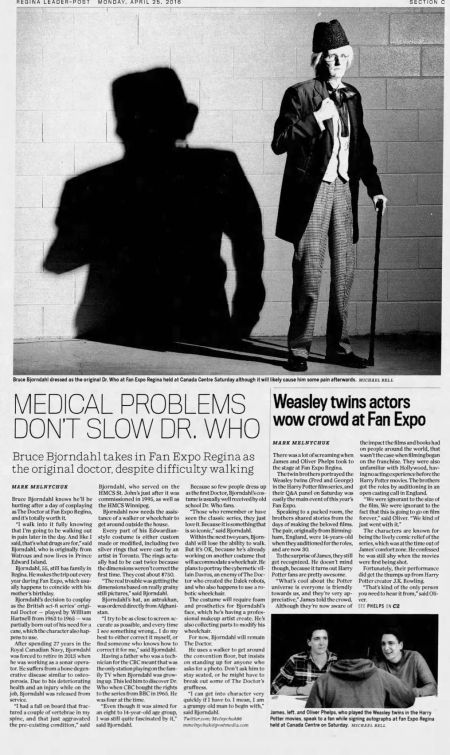 Bruce Bjorndahl knows he'll be hurting after a day of cosplaying as The Doctor at Fan Expo Regina, and it's totally worth it.

1 walk into it fully knowing that I'm going to be walking out in pain later in the day. And like I said, that's what drugs are for," said Bjorndahl, who is originally from Watrous and now lives in Prince Edward Island.

Bjorndahl, 55, still has family in Regina. He makes the trip out every year during Fan Expo, which usually happens to coincide with his mother's birthday.

Bjorndahl's decision to cosplay as the British sci-fi series' original Doctor — played by William Hartnell from 1963 to 1965 — was partially born out of his need for a cane, which the character also happens to use.

After spending 27 years in the Royal Canadian Navy, Bjorndahl was forced to retire in 2013 when he was working as a sonar operator. He suffers from a bone degenerative disease similar to osteoporosis. Due to his deteriorating health and an injury while on the job, Bjorndahl was released from service.

"I had a fall on board that fractured a couple of vertebrae in my spine, and that just aggravated the pre-existing condition," said Bjorndahl, who served on the HMCS St. John's just after it was commissioned in 1995, as well as the HMCS Winnipeg.

Bjorndahl now needs the assistance of a walker or wheelchair to get around outside the house.

Every part of his Edwardian-style costume is either custom made or modified, including two silver rings that were cast by an artist in Toronto. The rings actually had to be cast twice because the dimensions weren't correct the first time. They cost about $750.

"The real trouble was getting the dimensions based on really grainy still pictures: said Bjorndahl.

Bjorndahl's hat, an astrakhan, was ordered directly from Afghanistan.

"I try to be as close to screen accurate as possible, and every time I see something wrong... I do my best to either correct it myself, or find someone who knows how to correct it for me," said Bjorndahl.

Having a father who was a technician for the CBC meant that was the only station playing on the family TV when Bjorndahl was growing up. This led him to discover Dr. Who when CBC bought the rights to the series from BBC in 1965. He was four at the time.

"Even though it was aimed for an eight to 14-year-old age group, I was still quite fascinated by it: said Bjorndahl.

Because so few people dress up as the first Doctor, Bjorndahl's costume is usually well received by old school Dr. Who fans.

"Those who remember or have seen the classic series, they just love it. Because it is something that is so iconic," said Bjorndahl.

Within the next two years, Bjorndahl will lose the ability to walk. But ifs OK, because he's already working on another costume that will accommodate a wheelchair. He plans to portray the cybernetic villain Davros, an enemy of The Doctor who created the Dalek robots, and who also happens to use a robotic wheelchair.

The costume will require foam and prosthetics for Bjorndahl's face, which he's having a professional makeup artist create. He's also collecting parts to modify his wheelchair.

For now, Bjorndahl will remain The Doctor.

He uses a walker to get around the convention floor, but insists on standing up for anyone who asks for a photo. Don't ask him to stay seated, or he might have to break out some of The Doctor's gruffness.

"I can get into character very quickly if I have to. I mean, I am a grumpy old man to begin with," said Bjorndahl.

Caption: Bruce Bjorndahl dressed as the original Dr. Who at Fan Expo Regina held at Canada Centre Saturday although it will likely cause him some pain afterwards.