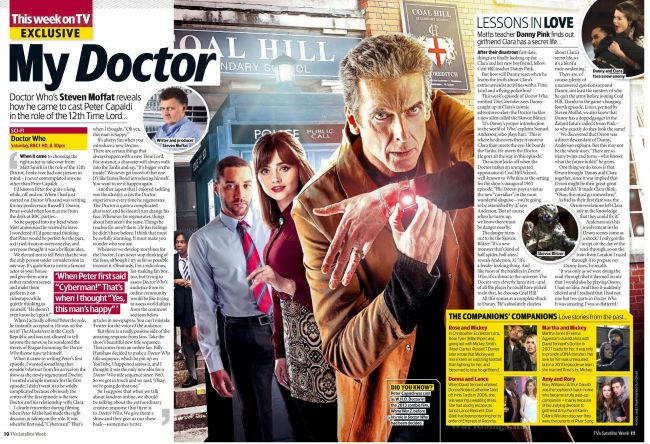 Doctor Who's Steven Moffat reveals how he came to cast Peter Capaldi in the role of the 12th Time Lord...

When it came to choosing the right actor to take over from Matt Smith in the role of the 12th Doctor, I only ever had one person in mind — I never contemplated anyone other than Peter Capaldi.

I'd known Peter for quite a long while, off and on. When I had just started on Doctor Who and was writing for my predecessor Russell T Davies, Peter would often loom at me from the dark at BBC parties.

So he popped into my head when Matt announced he wanted to leave. I wondered if I'd gone mad thinking that Peter would be perfect for the part, so I tried it out on everyone else, and everyone thought it was a brilliant idea.

We elected not to tell Peter that he was the only person under consideration in any way. It's quite fun to invite a famous actor to your house and give them some rather random scenes and make them perform it on videotape, while quietly thinking to yourself, "He doesn't even know he's got it!"

When I actually offered Peter the role, he instantly accepted it. He was on the set of The Musketeers in the Czech Republic and was not allowed to tell anyone the news, so he wandered the streets of Prague humming the Doctor Who theme tune to himself.

When it came to writing Peter's first episode, I wanted something that wouldn't distract from his arrival on the show as the newly regenerated Doctor. I wanted a simple menace for the first episode; I didn't want it to be wildly complicated because obviously the centre of the first episode is the new Doctor and his relationship with Clara.

I clearly remember during filming when Peter felt he had made the right decision in taking on the role. It was when he first said, "Cyberman!" That's when I thought, "Oh yes, this man is happy."

It's always fun when you introduce a new Doctor. There are certain things that always happen with a new Time Lord. For instance, a character will always walk into the Tardis and say, "It's bigger on the inside". We never get bored of that one. It's like James Bond introducing himself. You want to see it happen again.

Another aspect that I enjoyed tackling was the identity crisis the Doctor experiences every time he regenerates. The Doctor is quite a complicated character, and he doesn't just change his face. Whenever he regenerates, things about him aren't the same. Things he reaches for aren't there. He has feelings he didn't have before. I think that must be awfully alarming. It must make you wonder who you are.

Whenever we develop storylines for the Doctor, I can never stop thinking of the fans, although I try as far as possible to resist it. Obviously, I'm a ridiculous, list-making fan boy, too, but trying to assess Doctor Who's audience from its online community would be like trying to assess world affairs from the comment sections below articles in newspapers. You can't mistake Twitter for the voice of the audience.

So I suppose that when we talk about fandom online, we should be talking about the extraordinary creative response that there is to Doctor Who. We give them a show and they give us our show back — sometimes better.

After their disastrous first date, things are finally looking up for Clara and her new boyfriend, fellow Coal Hill teacher Danny Pink.

But how will Danny react when he learns the truth about Clara's extracurricular activities with a Time Lord and a flying police box?

This week's episode of Doctor Who, entitled The Caretaker, sees Danny caught up in Clara's cosmic adventures when the Doctor tackles a new alien called the Skovox Blitzer.

'It's Danny's proper introduction to the world of Who,' explains Samuel Anderson, who plays him. 'This is where he discovers there is more to Clara than meets the eye. He boards the Tardis. He meets the Doctor. He goes all the way in this episode.'

The action kicks off when the Doctor makes an unexpected appearance at Coal Hill School, well-known to Who fans as the setting for the show's inaugural 1963 episode. 'The Doctor pays a visit as the new "caretaker", in the most wonderful disguise — you're going to be astonished by it,' says Anderson. 'But of course when he turns up, we know there must be danger nearby.'

The danger turns out to be the Skovox Blitzer. 'It's a new monster that's kind of half spider, half alien,' reveals Anderson, 32. 'It's a freaky-looking thing. And like most of the baddies in Doctor Who, it's a threat to the universe. The Doctor very cleverly lures it in — and of all the places he could have picked to do that, he chooses Coal Hill.'

All this comes as a complete shock to Danny. 'He's absolutely clueless about Clara's secret life, so it's a bit of a rude awakening?

There are, of course, plenty of unanswered questions around Danny, not least the mystery of why he quit the army before joining Coal Hill. Thanks to the game-changing fourth episode, Listen, penned by Steven Moffat, we also know that Danny has a doppelganger in the distant future called Orson Pink—so why exactly do they look the same?

'We discovered that Orson was a direct descendant of Danny,' Anderson explains. But this may not be the whole story. 'There are so many twists and turns — who knows what the future holds?' he grins.

One thing we do know is that Orson brought Danny and Clara together, since it was implied that Orson might be their great-great grandchild. 'It made Clara think, "Okay, this must go somewhere". As bad as their first date was, the Orson revelations left Clara safe in the knowledge that they could fix it.'

Anderson says his involvement in the Orson scenes came as a shock. 'I only got the script on the day of the read-through, so on the train from London I raced through it to prepare my Danny lines,' he recalls.

'It was only as we were doing the read-through that it dawned on me that I would also be playing Orson. I had no idea. And then it suddenly clicked and I realised that I had not one but two parts in Doctor Who. It was amazing. I was so flattered?

Peter Capaldi was cast as W.H.O. Doctor in the 2013 zombie film, World War Z, before his role in Doctor Who had been decided.

THE COMPANIONS' COMPANIONS Love stories from the past...

In Christopher Eccleston's era, Rose Tyler (Billie Piper) was going out with Mickey Smith (Noel Clarke). Russell T Davies later wrote that Mickey was more keen on watching football than fighting for her, and 'deserved to lose his girlfriend'.

When David Tennant whisked Donna Noble (Catherine Tate) off in his Tardis in 2006, she was wearing a wedding dress. She had a lucky escape, as fiancé Lance Bennett (Don Gilet) had been poisoning her by order of Empress of Racnoss.

Martha Jones (Freema Agyeman) shared a kiss with David Tennant's Doctor in 2007 (sadly for her, it was only to provide a DNA transfer). Her love for him was unrequited, but in a 2010 episode we learn she married Rose's ex, Mickey.

Rory Williams (Arthur Darvill) was the boyfriend-back-home who became a fully paid-up companion — mainly because of his undying devotion to girlfriend Amy Pond (Karen Gillan). We later discover they were the parents of River Song.