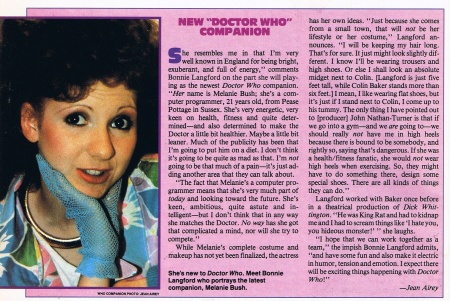 "She resembles me in that I'm very well known in England for being bright, exuberant, and full of energy," comments Bonnie Langford on the part she will playing as the newest Doctor Who companion. "Her name is Melanie Bush; she's a computer programmer, 21 years old, from Pease Pottage in Sussex. She's very energetic, very keen on health, fitness and quite deter-mined—and also determined to make the Doctor a little bit healthier. Maybe a little bit leaner. Much of the publicity has been that I'm going to put him on a diet. I don't think it's going to be quite as mad as that. I'm not going to be that much of a pain—it's just adding another area that they can talk about.

"The fact that Melanie's a computer programmer means that she's very much part of today and looking toward the future. She's keen, ambitious, quite astute and intelligent—but I don't think that in any way she matches the Doctor. No way has she got that complicated a mind, nor will she try to compete."

While Melanie's complete costume and makeup has not yet been finalized, the actress has her own ideas. "Just because she comes from a small town, that will not be her lifestyle or her costume," Langford announces. "I will be keeping my hair long. That's for sure. It just might look slightly different. I know I'll be wearing trousers and high shoes. Or else I shall look an absolute midget next to Colin. [Langford is just five feet tall, while Colin Baker stands more than six feet.] I mean, I like wearing flat shoes, but it's just if I stand next to Colin, I come up to his tummy. The only thing I have pointed out to [producer] John Nathan-Turner is that if we go into a gym—and we are going to—we should really not have me in high heels because there is bound to be somebody, and rightly so, saying that's dangerous. If she was a health/fitness fanatic, she would not wear high heels when exercising. So, they might have to do something there, design some special shoes. There are all kinds of things they can do."

Langford worked with Baker once before in a theatrical production of Dick Whittington. "He was King Rat and had to kidnap me and I had to scream things like 'I hate you, you hideous monster!'" she laughs.

"I hope that we can work together as a team," the impish Bonnie Langford admits, "and have some fun and also make it electric in humor, tension and emotion. I expect there will be exciting things happening with Doctor Who!"