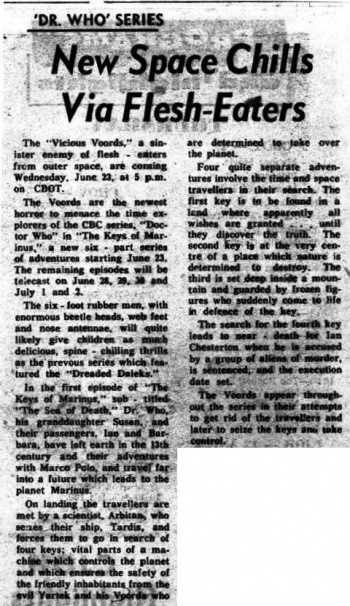 The "Vicious Voords," a sinister enemy of flesh - eaters from outer space, are corning Wednesday, June 23, at 5 p.m. on CBOT.

The Voords are the newest horror to menace the time explorers of the CBC series, "Doctor Who" in "The Keys of Marinus," a new six - part series of adventures starting June 23. The remaining episodes will be telecast on June 28, 29, 34 and July 1 and 2.

The six - foot rubber men, with enormous beetle heads, web feet and nose antennae, will quite likely give children as much delicious, spine - chilling thrills as the prevous series which featured the "Dreaded Daleks."

In the first episode of "The Keys of Marinus," sub - titled. "The Sea of Death," Dr. Who, his granddaughter Susan, and their passengers, Ian and Barbara, have left earth in the 13th century and their adventures with Marco Polo, and travel far into a future which leads to the planet Marinus.

Four quite separate adventures involve the time and space travellers in their search. The first key is to be found in a land where apparently all wishes are granted . . . until they discover the truth. The second key is at the very centre of a place which nature is determined to destroy. The third is set deep inside a mountain and guarded by frozen figures who suddenly come to life in defence of the key,

The search for the fourth key leads to near - death for Ian Chesterton when he is accused by a group of aliens of murder, is sentenced, and the execution date set.

The Voords appear throughout the series in their attempts to get rid of the travellers and later to seize the keys and take control.